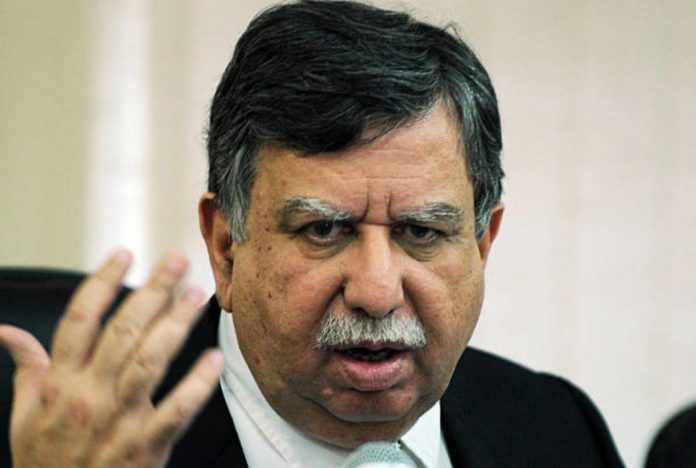 ISLAMABAD   –  The PTI-led coalition government on Thursday launched the Economic Survey 2020-21 showing that Pakistan has surpassed the annual growth target of 2.1 percent and touched 3.94 percent with the help in growth in manufacturing and services sectors.

“The economy is recovering,” said Federal Minister for Finance and Revenue Shaukat Tarin at the launching ceremony of Economic Survey of Pakistan 2020-21 along with economic team of the incumbent government. “The government itself had set [GDP] growth target at 2.1 percent and the IMF and World Bank had predicted and even lower number. But the decisions by this government such as incentivising manufacturing, textiles, construction, and interventions in agriculture have helped the economy recover.”

Finance Minister said Pakistan has rejected the International Monetary Fund (IMF) demand of increasing power tariff and imposing tax on existing taxpayers of the country. He informed that IMF is asking for increasing tax burden on existing income taxpayers, which is unjustified.

“We have provided an alternate plan to them to meet the tax collection target of Rs5.8 trillion in next fiscal year without putting additional burden on existing taxpayers.” He said that the country cannot afford to increase taxes or hike tariffs so that the poor and the salaried class do not feel additional burden of inflation. “This is a red line for the Prime Minister,” he said. “We will not further burden the poor,” he added.

He informed that it was time to focus on sustainable growth “until we go to 5-8 percent GDP growth”. “Around 60 percent of youth are in age range of 25 to 30 years. We will require providing 2 million jobs to youth every year, which can only come from the higher growth rate”. Talking about State Owned Entities (SOEs), he said that government would establish a board of professionals under Sarmaya-e-Pakistan’s (SLP) to restructure 15 entities before their privatization.

Talking about the annual budget, Tarin said that government would provide relief to the masses in budget. “We will do interventions and take care of the poor. The poor man has been crushed in this stabilisation phase because the dreams we have shown them have been of a trickledown economy. And this can only happen when growth is sustainable and continuous for 20-30 years,” he said.

Shaukat Tarin said that large scale manufacturing (LSM) sector has recorded growth of 9 percent in first nine months (July to March) of the current fiscal year. Agriculture sector registered growth of 2.77 percent on the back of bumper crops of wheat, rice, maize and sugarcane. Foreign remittances had broken records by touching $26 billion mark in eleven months (July to May) of the current fiscal year. Remittances are projected to reach $29 billion by the end of year 2020-21. “This shows the confidence that overseas Pakistanis have in Prime Minister Imran Khan,” he said.

Finance Minister said that Pakistan’s current account is in surplus due the record higher remittances. However, imports have gone up mainly due to increase in oil prices in international market and importing food commodities like wheat, sugar and others. “We were net exporter of food but now, we have become a net importer,” he said. “Our exports registered a growth but our remittances increased manifold,” he added. He expressed feared that foreign remittances might not remain on same level in future.

Finance Minister said that Federal Board of Revenue (FBR) has performed well than the expectations, as it collected Rs4.2 trillion in eleven months with the growth of 18 percent. The government, he said, has projected that tax collection would increase to Rs4.7 trillion by the end of current fiscal year. Tarin informed that government has kept the tax collection target at Rs5.8 trillion for the next fiscal year. For the first time in 12 years, the primary balance was in surplus, he maintained.

He admitted that inflation is on the higher side. However, he held international market responsible for increasing prices of basic food commodities in the country. Tarin said that government has not passed the full impact of international commodities prices to its people. The finance minister said the government wanted to control inflation “but prices are still high and affecting the common man”. “So the way to solve this is by increasing production and that is why we have focused on agriculture in this budget,” Tarin said.

Talking about external sector of the economy, Tarin informed that Pakistan’s foreign exchange reserves helped by the State Bank of Pakistan have increased to 4 years highest level of $16 billion as against $7 billion when incumbent government took charge in 2018. He said that Pakistan is making progress on FATF conditions and hoped that the country will get relief in the next review. However, he said that he could not predict when the FATF would remove Pakistan from its grey list.

Finance Minister said that government would increase the exports and foreign direct investment (FDI). He informed that government would end the practice of people being harassed by introducing self assessment scheme in the budget. The FBR would issue notices to only 3-4 percent tax filers. He said once the third-party conducts its audit and finds a party guilty, that individual will be thrown into jails. He was of the view that there should be only two taxes, income and consumption tax.

On a question, he informed that he would meet the Etisalat delegation for recovering $800 million of Pakistan against privatization of PTCL after the budget. Shaukat Tarin further said that at-least four meetings of NEC will be held instead of a yearly meeting as government wants more participation from the provinces.

Earlier, Finance Minister said that economic activity in the country has started to revive as smart lockdown policy of Prime Minister Imran kept the country running even during coronavirus pandemic. He informed that before COVID-19, working population in the country stood at 55.6 million; however, due to lockdown it declined by massive 20 million in March 2020. Later, the bold decisions  by the Prime Minister Imran Khan put the economy in revival mode and now working population has reached 53 million by October last year.

Speaking about the energy challenges, Tarin said Pakistan’s economy was burdened due to the overcapacity in the power sector, saying that “it was a very big challenge and a black hole” for Pakistan.  “We have to continue to make capacity payments as a result,” he said, adding that even if Pakistan continued to grow at 4.5 or 6% in the next couple of years, the extent to which Pakistan had overbuilt, it is not possible for the country to utilise that capacity.  He said the government will not resort to increasing tariff time and again, saying that it will have a cascading effect on inflation. “Indirectly, even the poor will be burdened with inflation over it,” he said, adding that the government will take 7-8 years to eliminate circular debt.

Special Assistant to Prime Minister on Poverty Alleviation & Social Protection Sania Nishtar said that latest Poverty numbers are yet to be released by Pakistan Bureau of Statistics and Planning Commission. She said that numbers we have are for the year 2016 is at 24 percent.