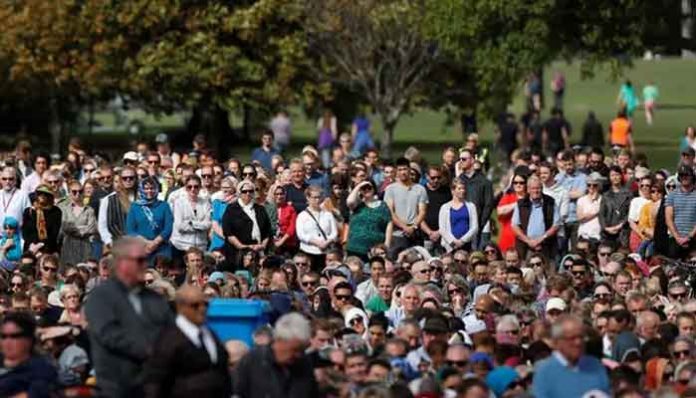 CHRISTCHURCH: A large number of New Zealanders have gathered in Christchurch’s Hagley Park as part of a nationwide remembrance service in honour of 50 Muslims murdered in the country’s worst terrorist attack.
The service, known as Ko Tātou, Tātou We Are One, is being jointly led by the government, the City of Christchurch, local iwi Ngāi Tahu and the Muslim community.
The New Zealand Prime Minister Jacinda Ardern was joined by representatives from nearly 60 nations, including her Australian counterpart Scott Morrison., along with survivors of the attack and those who lost loved ones when a gunman stormed two mosques in central Christchurch two weeks ago.
Ardern, who has been widely hailed for her response to the tragedy and received a prolonged standing ovation when she took the stage, praised the way New Zealanders had embraced their devastated Muslim community since the attacks.
“Racism exists, but it is not welcome here,” she said.
Farid Ahmed, whose wife Husna Ahmed was killed in Al Noor mosque, was among those due to address the crowd.
Husna had rescued several children in the mosque, which borders Hagley Park, on the day of the attack. However, she was killed when she returned to find her husband, who uses a wheelchair.
During her address, Ardern said the focus of the service was the Muslim community and the city of Christchurch, however, 59 countries are also represented including heads of state from the Pacific community.
The ceremony will also include members of Christchurch’s Islamic community reading out the names of each of the 50 victims of the terrorist attack.
Also scheduled to speak are Muslim leaders Shaggaf Khan and Mustafa Farouk, Ardern, governor-general Dame Patsy Reddy, and Christchurch mayor Lianne Dalziel.
British singer Yusuf Islam, previously known as Cat Stevens, will perform with other local musicians including Marlon Williams and Hollie Smith.
Large swaths of the city have been sealed off, with police saying much planning had gone into the service and that public safety was the priority. The national threat level is still high. …Agencies