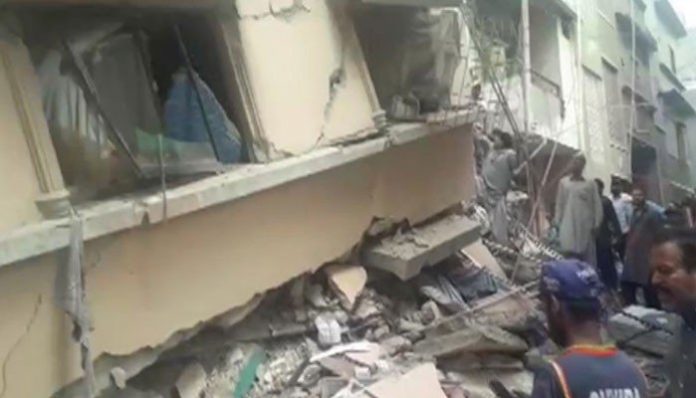 KARACHI: A building has collapsed in Karachi’s Golimar and multiple people are trapped beneath the rubble.
So far, at least three deaths have been confirmed and eight injuries. Of the eight people injured, two are reportedly in critical condition.
The injured have been taken to Abbasi Shaheed Hospital where Karachi Mayor Wasim Akhtar says an emergency has been declared.
The building is located in Golimar Number 2 and was named 400 Quarter building. It was built on 80 square yards of land two years ago, according to residents of the area, who say 10 families lived in the building.
Rescue teams have arrived at the scene but are having difficulties reaching the scene because of the massive number of people gathered at the scene. Cries can be heard of people stuck beneath the rubble. Neighbours are helping rescue people.
According to residents, a clinic had been set up on the ground floor of the building.
Rangers and police personnel are at the scene and are helping with the rescue work.
Chief Minister Murad Ali Shah and Governor Imran Ismail have taken notice of the collapse.
Personnel from the Urban Research Rescue Centre have arrived at the scene on the orders of the mayor. The rescue teams have tools to remove big pieces of concrete and are using them to rescue people.
Local Government Minister Nasir Hussain is at the scene. He said their complete focus is on the rescue efforts. There will be an inquiry into this and action taken, he said.