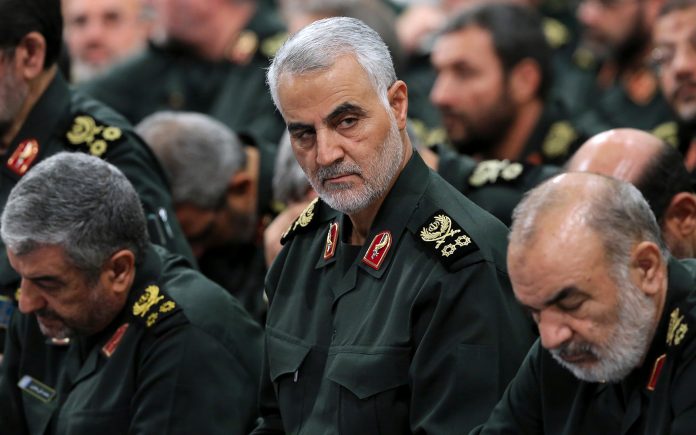 BAGHDAD: Top Iranian commander Qasem Soleimani was killed on Friday in a US strike on Baghdad’s international airport, confirmed Iran and the US, in a dramatic escalation of tensions between the two countries.
The Pentagon said US President Donald Trump ordered Soleimani’s “killing”, after a pro-Iran mob this week laid siege to the US embassy. Following Soleimani’s death, Trump tweeted an image of the US flag without any further explanation.
Meanwhile, Iranian Supreme Leader Ayatollah Ali Khamenei vowed to exact “severe revenge” for Soleimani’s death.
“Martyrdom was the reward for his ceaseless efforts in all these years,” Khamenei said on his Twitter account in reference to Soleimani, also declaring three days of mourning.
“With him gone, God willing, his work and his path will not be stopped, but severe revenge awaits the criminals who bloodied their foul hands with his blood and other martyrs’ in last night’s incident,“ he added.
The pre-dawn developments mark the most major escalation yet in a feared proxy war between Iran and the US on Iraqi soil.
Early on Friday, a volley of missiles hit Baghdad’s international airport, striking a convoy belonging to the Hashed al-Shaabi, an Iraqi paramilitary force with close ties to Iran.
Just a few hours later, Iranian state television carried a statement by the Revolutionary Guard Corps saying Soleimani “was martyred in an attack by America on Baghdad airport this morning”.
The Hashed confirmed that both Soleimani and its deputy chief Abu Mahdi al-Muhandis were killed in what it said was a “US strike”. “The deputy head of the Hashed, Abu Mahdi al-Muhandis, and head of the Quds Force, Qasem Soleimani, were killed in a US strike that targeted their car on the Baghdad International Airport road,” it said.
The Hashed is a network of mostly-Shia armed units, many of whom have close ties to Tehran but which have been officially incorporated into Iraq’s state security forces.
The units joined forces to fight the militant Islamic State group in 2014, after many of them built up years of fighting experience during Iraq’s war years, including against the US.
According to AP, Iraqi officials said five others were also killed.
Iran minister calls US act ‘foolish escalation’
Iran’s foreign minister slammed Soleimani’s killing as a dangerous escalation and warned the United States would bear responsibility for the consequences.
“The US’ act of international terrorism, targeting and assassinating General Soleimani […] is extremely dangerous and a foolish escalation,” Mohammad Javad Zarif wrote on Twitter.
“The US bears responsibility for all consequences of its rogue adventurism,” he added.
Iran’s top security body called an urgent meeting on Friday over the “martyrdom” of Qasem Soleimani by the United States in Baghdad, semi-official news agency ISNA reported.
“In a few hours, an extraordinary meeting of the Supreme National Security Council will be held to review the murderous attack on the vehicle of General Soleimani in Baghdad that lead to his martyrdom,” ISNA quoted its secretariat spokesman Keyvan Khosravi as saying. …Agencies