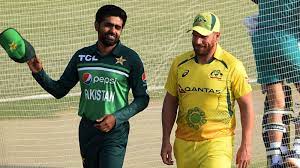 LAHORE: Australia’s Travis Head marked his return to the one-day international side with a blistering century to help the visitors secure a comfortable 88-run victory over Pakistan in the first game of their three-match series in Lahore on Tuesday.

Opener Head, playing his first ODI since November 2018, struck 12 boundaries and three sixes in a 72-ball 101 that powered Australia to 313-7. Ben McDermott (55) was also among the runs as he notched up his maiden ODI fifty.

At one stage, Australia looked set for a bigger total but spinners Zahid Mahmood (2-59) and Khushdil Shah (1-50) dragged things back for Pakistan in the middle overs before a late flourish from Cameron Green (40 not out) pushed the Australians past 300.

In response, the hosts struggled for momentum on a slowish Gaddafi Stadium wicket despite a fine century from opener Imam-ul-Haq (103), who was removed by a Nathan Ellis yorker in the 39th over to swing the match in Australia’s favour.

Head (2-35) capped off the perfect day with two wickets as he combined with fellow spinners Adam Zampa (4-38) and Mitchell Swepson (2-53) to further restrict Pakistan, who were bowled out for 225 in 45.2 overs. The two sides will meet at the same venue for the second ODI on Thursday.