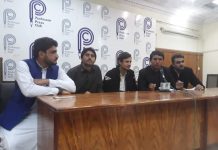 PESHAWAR: Youth of Waziristan, a civil society organisation comprising of youth from North and South Waziristan held a press conference in Peshawar, calling upon government to set up court system in erstwhile FATA as Peshawar High Court (PHC) declared the existing governing regulation- Interim Governance Regulation (IGR) – illegal.
The IGR was introduced as a replacement of Frontier Crime Regulation (FCR) in erstwhile FATA but that was declared by PHC on 30 October 2018 null and void because it found it unconstitutional.
Adil Dawar, chairman of Youth Of Waziristan along with members of his organization told journalists that government should handover responsibility of security to police force immediately and plan recruitment of local people in police force so that local people benefit from mainstreaming.
He said proper constitutional steps were taken to make erstwhile FATA part of Khyber Pakhtunkhwa therefore government should implement it in letter and spirit and shouldn’t hesitate to extend policing to tribal districts. He added youth from tribal districts should be employed in police and courts while ‘Khassadar force’ should also be retained as a separate entity.
He demanded that 3G and 4G Internet should be extended to tribal districts so that youth could benefit from it.