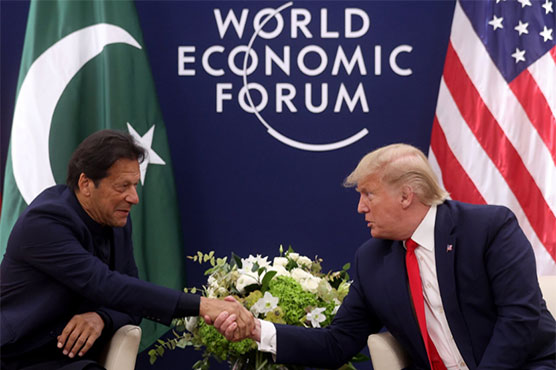 DAVOS: Prime Minister Imran Khan met with United States President Donald Trump on the sidelines of World Economic Forum (WEF) in Davos.
US President Trump said that it is an honour to meet PM Imran with whom he is going to discuss trade and many other issues. He emphasized on the trade and called it of “paramount importance”.
President Trump again offered to play the role of a mediator between Pakistan and India on the matter of Kashmir and said the US is keeping a “close watch” on the matter. “What’s going on between Pakistan and India … if we can help, we certainly will be willing to. We have been watching it very closely and it’s an honour to be here with my friend,” he added.
“The Pakistan-India conflict is a very big issue for us in Pakistan and we expect the US to always play its part in de-escalating the tensions, because no other country can,” PM Imran said, adding that he will continue to play his role for peace in the region.
Both leaders interacted in a highly cordial atmosphere with the press where Trump appreciated PM Imran, whom he referred to as his ‘friend’. PM Imran expressed that the matters pertaining to Afghan Peace Process, deteriorating situation in Kashmir and regional situation will be discussed as Pakistan has an important relation with the US.
Trump also underscored the relationship with Pakistan and expressed: “Never been this close as we are now”. Both leaders extended warmness towards each other and announced to pay heed to crucial issues.
Other matter namely bilateral interests, Pak-US relations and regional security and peace is also expected to come under discussion.
Meanwhile, the prime minister will also hold separate meetings with Singapore PM and Azerbaijan President.
Earlier, Prime Minister Imran Khan reached Davos, Switzerland, to attend the World Economic Forum (WEF) from 21 to 23 January 2020, at the invitation of Professor Klaus Schwab, Founder and Executive Chairman of WEF.
Foreign Minister Shah Mehmood Qureshi is accompanying the premier for the session whose thematic focus is on, “Stakeholders for a Cohesive and Sustainable World.”
This year marks the 50th anniversary of the Forum. In keeping with the significance of this milestone, political leaders, business executives, heads of international organizations and civil society representatives will deliberate on contemporary economic, geopolitical, social and environmental issues.
Two key highlights of the visit include the Prime Minister’s “Keynote Address” at the WEF Special Session, and his interaction at the “Pakistan Strategy Dialogue” with CEOs and corporate leaders.
On the sidelines, the Prime Minister will hold bilateral meetings with several world leaders. These include Prime Minister’s meeting with US President Donald Trump. This would be the third leadership-level interaction between Pakistan and the US since the Prime Minister’s visit to Washington in July 2019.
Several meetings are also scheduled with a wide range of corporate, business, technology and finance executives, and representatives of international financial institutions.
The prime minister will also speak to senior international media persons and editors during a session with the Forum’s International Media Council. The Prime Minister will also give interviews to major international media outlets.
Throughout his engagements at Davos, the Prime Minister will share Pakistan’s vision and achievements in the areas of economy, peace & stability, trade, business and investment opportunities.
Imran Khan will also highlight the current situation in the Indian Occupied Jammu & Kashmir and Pakistan’s perspective on key regional and international issues.