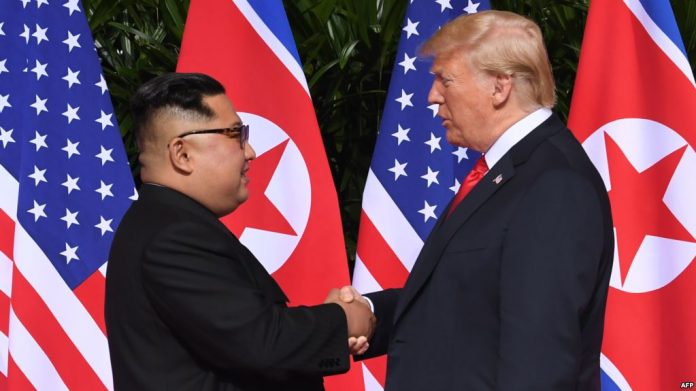 SINGAPORE: Donald Trump and Kim Jong made history on Tuesday, becoming the first sitting US and North Korean leaders to meet, shake hands and come on negotiating table to end a decades-old nuclear stand-off.
After reaching the venue of their historic summit in Singapore , both the leaders Kim Jong Un and Donald Trump briefly appeared before the world media, shaking hands for giving the message to narrow differences.
The will hold comprehensive talks to seek ways to end a nuclear standoff. While the officials of the two sides held last-minute talks to lay the groundwork for the summit of the old foes, an event almost unthinkable just months ago, when they were exchanging insults and threats that raised fears of war.
In a series of tweets early Tuesday morning Singapore time, Trump indicated that summit preparations were “going well and quickly”.
“We will all know soon whether or not a real deal, unlike those of the past, can happen,” he tweeted — before hitting out in a subsequent post at “haters & losers” who see the summit itself as a risky up-front concession to Kim.
Pointing at the recent release of three American hostages and Pyongyang´s pledge to refrain from further nuclear or missile tests, Trump charged that “these pundits, who have called me wrong from the beginning, have nothing else they can say!”
Karen Leong, Managing Director of Singapore-headquartered Influence Solutions, said the first 60 seconds showed both leaders seeking to take charge in their encounter.
“Their handshake seems to be between peers,” she said.
“Trump seemed to be very aware of this, that he needed to up the stakes and be seen that he is the leader.”
Trump did most of the talking, and Kim appeared to listen attentively, turning to him three times during their walk toward their meeting room. But he also patted the US president´ arm, in an attempt to show control over the encounter.
The US President, who is more than twice Kim´s age, then appeared to lead the way to the library where they held a one-on-one meeting, placing his hand on the North Korean leader´s counterpart´s back. However, Leong said both found it difficult to conceal their nervousness once they were seated, with Trump displaying a slanted smile, and fidgeting with his hands and Kim leaning and staring at the ground.
For his part, Kim called Trump a “mentally deranged US dotard” and said he would “tame” him, “with fire”.
That will seem a distant memory later Tuesday amid the palms and whitewashed walls of Singapore´s ultra-exclusive Capella Hotel, where the two men walked towards each other and then sat down for meetings with ramifications for the entire world.
It is a historic meeting for both men — perhaps comparable to president Richard Nixon´s 1972 visit to China, or Ronald Reagan´s summit 1986 with Mikhail Gorbachev in Reykjavik.
It is potentially legacy-defining — as long as they can disprove critics´ fears that the meeting will be more about drama than detail.
The North has promised to give up its weapons in the past, while a long history of previous agreements have ultimately foundered.
“If there is no statement of intentions to move toward a peace treaty, if there´s no statement from the North Korean side on denuclearisation, we´re going to find ourselves very quickly in a very hollow summit,” said Ryan Hass of the Brookings Institution.
If that happened, he added, “quickly we´ll move into a space of mutual recrimination and finger-pointing about whose fault it was”.
The pair — Kim in his thirties and consolidating his dictatorship, Trump in his seventies and struggling to bend Washington to his impetuous will — are unlikely protagonists, both instantly recognisable and larger-than-life.
Washington and Pyongyang are still technically at war, even if the mortars, carbines and gunships of the bloody 1950s conflict have long since fallen silent.
And the totalitarian regime has made rapid progress towards marrying nuclear and missile technology that would put Los Angeles, New York and Washington within striking distance of a nuclear holocaust.
The United States says that is unacceptable and will be dealt with, one way or another.
But for North Korea the mere fact of the talks is a hugely symbolic advance.
For its leader, standing as an equal beside the US president in front of a phalanx of cameras is a goal the pariah state has sought for decades, with critics charging that it legitimises one of the most ruthless regimes.
On Monday evening Kim — accompanied by a phalanx of bodyguards and his personal television crew — took a night-time stroll on the Singapore waterfront, even posing for grinning selfies with the city-state´s foreign minister.
Yet it remains far from clear that Pyongyang is willing to give up its nuclear weapons, which it says it needs to defend itself against a US invasion.
On the eve of the meeting, aides from both sides were still scrambling to narrow yawning differences over “denuclearisation”, which means vastly different things to the two parties.
Trump, who is due to leave Singapore on Tuesday evening, will use what he says are long-honed instincts to see whether Kim if bluffing, buying time or serious.
Secretary of State Mike Pompeo said on Monday that the United States was willing to offer the regime “unique” security guarantees, to “provide them sufficient certainty that they can be comfortable that denuclearisation is not something that ends badly for them”.
Kim and Trump will first meet one-on-one in a closed session, before a larger meeting with key advisers, US officials said.
But Pompeo signalled that the summit was likely to be the start of a longer process of negotiation, and warned the United States would not be “duped”, with nothing less than complete, verifiable and irreversible denuclearisation considered. …Agencies