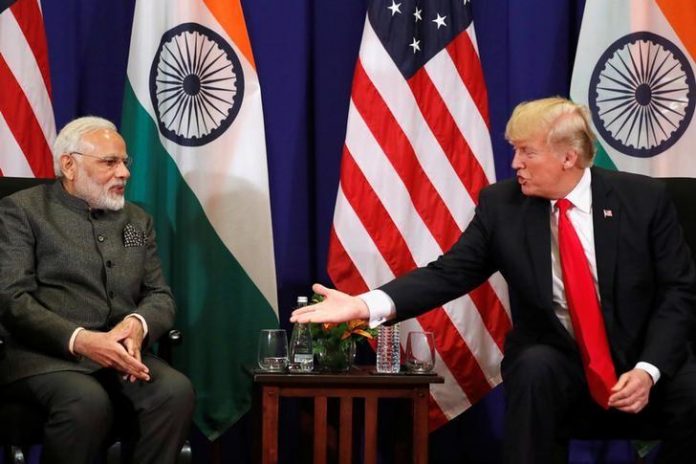 WASHINGTON: U.S. President Donald Trump and Indian Prime Minister Narendra Modi spoke by phone on Thursday, discussing topics including the political crisis in the Maldives, the war in Afghanistan and the plight of Rohingya refugees from Myanmar, the White House said.
The Trump administration has launched an effort to deepen military and economic ties with India as a way to balance China’s assertive posture across Asia.
The Maldives, best known for luxury tourist resorts, has become another arena of contest for India and China after it signed up to Beijing’s Belt and Road initiative to build trade and transport links across Asia and beyond.
The embattled president of the Indian Ocean nation has sent envoys to friendly nations such as China, Pakistan and Saudi Arabia to brief them on a political crisis that spurred the imposition of a state of emergency.
Trump and Modi “expressed concern about the political crisis in the Maldives and the importance of respect for democratic institutions and rule of law,” the White House said in a statement.
They repeated their commitment to Afghanistan’s security, the statement added. Washington recently cut aid to Pakistan, India’s nuclear-armed neighbor and arch-rival, over accusations it failed to root out Taliban and Haqqani network militants that have contributed to the long-running war in Afghanistan.
India has increased aid to Afghanistan in recent years and promised in 2016 to ship more arms, aggravating fears in Pakistan it will become wedged between two hostile nations.
The two leaders also addressed the plight of more than 680,000 Muslim Rohingya who have fled Myanmar since last year to Bangladesh after the Myanmar military cracked down in northern Rakhine State, amid witness reports of killings, looting and rape, in response to militant attacks on security forces.
Trump and Modi also addressed North Korea, the White House said. Washington has been leading diplomatic efforts to ramp up international pressure on Pyongyang over its nuclear weapons and missile programs, out of concern they may eventually enable North Korea to attack the United States.
Although India and North Korea maintain diplomatic offices in each other’s capitals, New Delhi has banned trade of most goods with the country, except for food and medicine.
Indian Foreign Minister Sushma Swaraj met with U.S. Secretary of State Rex Tillerson in October in New Delhi and defended India’s ties with Pyongyang, saying some level of diplomatic presence was necessary to keep open channels of communication. – Reuters