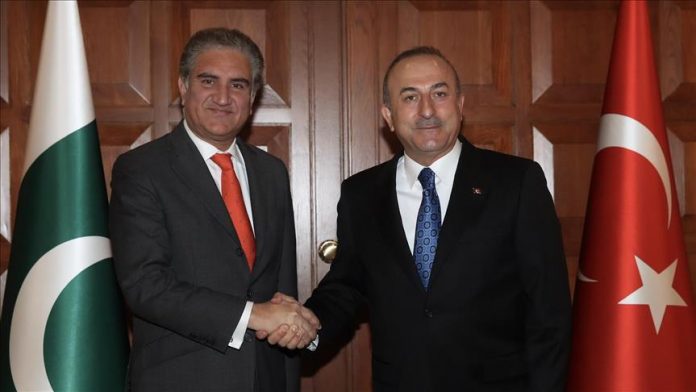 ISLAMABAD: Turkish Foreign Minister Mevlut Cavusoglu in a telephonic conversation with Shah Mehmood Qureshi on Saturday extended condolences on the Quetta mosque blast, and praised Pakistan’s effort for de-escalating tensions in the region.
Turkish FM expressed grief on the terror attack in the provincial capital of Balochistan which claimed many innocent lives. He condemned the loss of valuable lives and expressed solidarity of Turkey with Pakistan on this tragic incident.
Meanwhile, Mevlut also ensured full support of Turkey to Pakistan on establishing peace in the region following the killing of the Iranian top military commander, Qasem Soleimani, by the US. He lauded the effort for de-escalating US-Iran tensions in Mideast.
Qureshi also apprised his counterpart of his upcoming tours of Iran, Saudi Arabia and the United States. Similarly, Turkish FM briefed his Pakistani counterpart on his recent visit to Iraq during which the situation in the region was discussed.
Iran’s confession of hitting Ukrainian plane to lessen concerns: FM Qureshi
Foreign Minister Shah Mehmood Qureshi said Iran’s confession of unintentionally shooting down a Ukrainian passenger plane is likely to reduce concerns over the matter.
The foreign minister said in his statement that the region cannot afford another war and stressed that Pakistan will continue to play its role in lessening the ongoing tensions.
Shah Mehmood Qureshi told that he is leaving for Iran on Prime Minister Imran Khan’s directions and will hold meetings with the Iranian leadership.
Conflict between Iran and the United States should be cut down and US President Donald Trump’s recent statement is a ray of hope in this regard, Qureshi said.