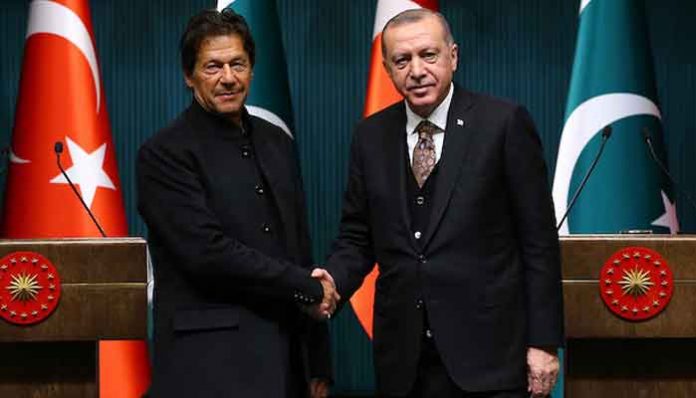 ISLAMABAD: Turkish President Recep Tayyip Erdogan left Pakistan on Friday as his two-day visit to the country concluded.
The Turkish president had arrived in Pakistan on February 13 along with his wife and a delegation comprising Turkish businessmen and senior members of the government.
During his visit, 12 Memorandum of Understandings (MoUs) were signed between the Turkish and Pakistani governments.
In his address to the Pakistani parliament, Erdogan had said that he was thankful and happy to have had the opportunity to address the joint session of the parliament in Pakistan.

Also read: Turkish President assures to fully back Pakistan on important issues
“I am thankful for this opportunity. I am thankful to each of you individually for allowing me to address this joint session of Parliament,” he had said.
Erdogan further thanked the Pakistani people and leadership over the warm welcome he was accorded upon arrival. “It is my pleasure to speak to you. I am thankful to you for giving me the opportunity to address this house.” “While in Pakistan, I feel like I am at home,” he had said.
“Today, Pakistan and Turkey’s relations are admirable for others. During difficult times, Pakistan has supported Turkey,” Erdogan added. “Our friendship is based on love and respect. Pakistan’s pain is our pain,” the Turkish president remarked.
Speaking about the issue of occupied Kashmir, Erdogan said that Indian-occupied Kashmir meant to Turkey exactly what it had meant to Pakistan over the years. “The relationship between Pakistan and Turkey will continue in the future like it has in the past,” he added.
In his speech, the Turkish president also said that Turkey had supported Pakistan on matters related to counter terrorism. “We assure Pakistan of Turkey’s support at the Financial Action Task Force,” Erdogan said.