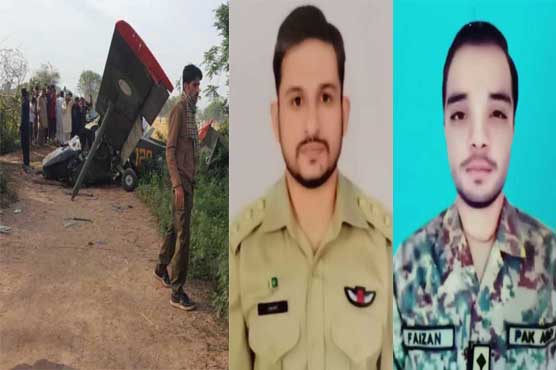 GUJRAT: The trainer Mushshak aircraft of Pakistan Army on Monday has crashed near Gujrat during routine flight, Inter-Services Public Relations (ISPR) confirmed.
According to the military media wing, instructor pilot Major Umar and Lieutenant Faizan have embraced martyrdom in the mishap.
Earlier in July, 2019, a military aircraft on a training flight crashed in a built-up area in the garrison city of Rawalpindi, claiming lives of all five crew members and 13 civilians.
A statement from the Pakistani military said the aircraft was on a routine training flight when it crashed near Rabi Plaza but there was no immediate word on the cause of the accident or the type of aircraft involved.
According to ISPR, the army personnel who died in the plane crash included Lt Col Saqib and Wasim, Naib Subedar Afzal, Hawaldar Ibne Amin and Rahmat.