RAWALPINDI: The Inter-Services Public Relations (ISPR) on Thursday said that two soldiers of Pakistan Army embraced martyrdom and one was wounded as Indian troops resorted to unprovoked firing in the Dewa sector along the Line of Control (LoC). 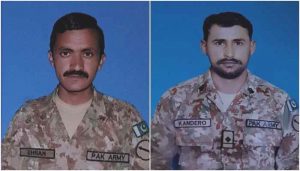 In a statement issued earlier today, the Director-General ISPR, Major General Asif Ghafoor, said that three Indian soldiers had also been killed in the exchange of fire by Pakistan Army responding to the Indian aggression.
“Indian cease fire violations (CFVs) along the Line of Control (LoC) during the last 36 hours. Responding to CFVs, in Haji Pir Sector Pakistan Army troops damaged Indian post killing three Indian soldiers including a Subedar, few injured too,” ISPR tweeted.
The ISPR identified the martyred as Naib Subedar Kandero and Sepoy Ehsan.
Indian army chief General Bipin Rawat, in suggestive and provocative remarks, had last week said that the situation along the Line of Control could escalate any time and that the Indian army was prepared for the spiraling of the escalation matrix, The Times of India had reported.