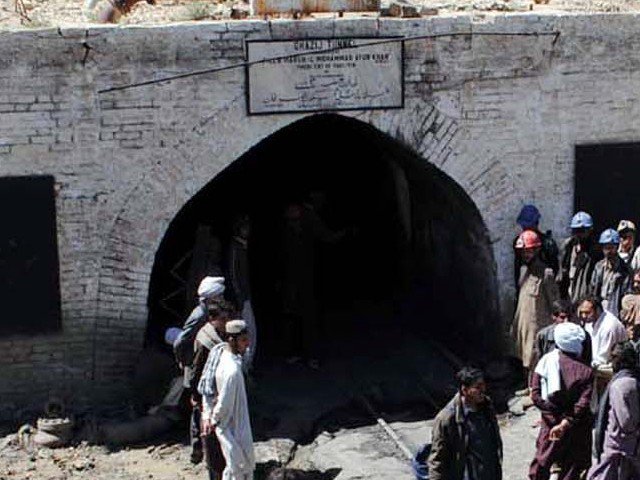 QUETTA: Two miners died after being hit by a trolley inside a coal mine in Balochistan’s coal-rich Dukki district on Sunday morning.
According to Levies sources, the miners were extracting coal from deep within the mine when the trolley hit them. The bodies of the two miners, who died on the spot, have been shifted to District Headquarters Hospital Dukki.
The sources said the deceased miners who were from Afghanistan had been working in the Dukki coal mines for the last few years.
“There is no safety for coal miners,” said the central leader of Pakistan Mines Labour Association, Bakht Nawab, adding that miners extract coal at the cost of their lives.
Coal miners also claim that they pay taxes to the Balochistan government for their safety. “We pay Rs120 as a miner safety tax to the government”, Fateh Shah Arif, a coal mine owner said.
He said it was the responsibility of government along with coal mine owners to improve working conditions for miners.
Hazardous working conditions inside coal mines of Balochistan are often cited as the reason behind the loss of precious human lives.
According to statistics provided by the provincial Mines and Minerals Development Department, over 1,000 coal miners have died in such kind of incidents during the last 18 years in Balochistan.
This month alone, 13 coal miners have died in Dukki. Sunday’s incident comes days after a methane gas blast inside a coal mine in the district claimed the lives of six miners.
Daily production of coal in various parts of Balochistan comes to about 20,000 tonnes.