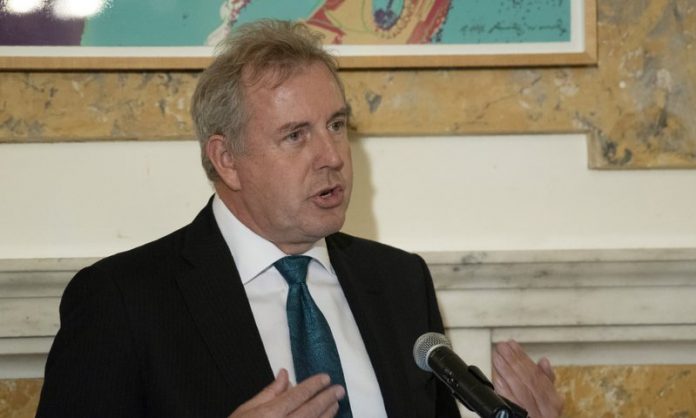 LONDON: The UK Foreign Office said on Wednesday that Britain’s ambassador to the United States has resigned, just days after diplomatic cables criticising President Donald Trump were leaked.
Kim Darroch said in a letter on Wednesday that even though his posting was due to end this year, he believed “in the current circumstances the responsible course is to allow the appointment of a new ambassador”.
Darroch said he is “grateful to all those in the UK and the US, who have offered their support during this difficult few days”.
Prime Minister Theresa May said it was a “matter of regret” that Darroch resigned.
Darroch’s forthright, unfiltered views on the US administration — meant for a limited audience and discreet review — appeared in leaked diplomatic documents that were published in Britain’s Mail on Sunday newspaper.
In memos to the British government which date from 2017 to the present, Darroch said Trump “radiates insecurity” and advises officials in London that to deal with him effectively “you need to make your points simple, even blunt”.
“We don’t really believe this administration is going to become substantially more normal; less dysfunctional; less unpredictable; less faction riven; less diplomatically clumsy and inept,” Darroch wrote in one, according to the newspaper.
After the documents made headlines, Trump declared he would cut contact with the diplomat and called him “a very stupid guy”.
“I don’t know the Ambassador but have been told he is a pompous fool,” Trump wrote in a series of early morning tweets doubling down on British envoy Kim Darroch.
“The wacky Ambassador that the United Kingdom foisted upon the US is not someone we are thrilled with, a very stupid guy,” Trump added.– Agencies