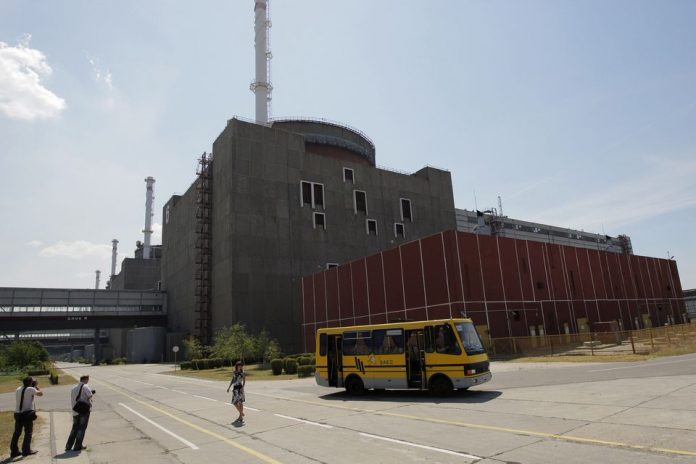 LVIV, Ukraine, March 4 (Reuters) – A fire that broke out in a training building near the largest nuclear power plant in Europe during intense fighting between Russian and Ukrainian forces has been extinguished, Ukraine’s state emergency service said on Friday.

U.S. Energy Secretary Jennifer Granholm said there was no indication of elevated radiation levels at the Zaporizhzhia plant, which provides more than a fifth of total electricity generated in Ukraine.

Earlier, a video feed from the plant verified by Reuters showed shelling and smoke rising near a five-storey building at the plant compound. The footage shot at night showed one building aflame, and a volley of incoming shells, before a large candescent ball lit up the sky, exploding beside a car park and sending smoke billowing across the compound. It was not immediately clear who was in control of the plant.

Zelenskiy said Russian tanks had shot at the nuclear reactor plants, though there was no evidence cited that they had been hit.

The mayor of the nearby town of Energodar about 550 km (342 miles) southeast of Kyiv said fierce fighting and “continuous enemy shelling” had caused casualties in the area, without providing details.

Thousands of people are believed to have been killed or wounded and more than 1 million refugees have fled Ukraine since Russian President Vladimir Putin last Thursday launched the biggest attack on a European state since World War Two.

Early reports of the incident at the power plant sent financial markets in Asia spiralling, with stocks tumbling and oil prices surging further.

Russia has already captured the defunct Chernobyl plant, about 100 km north of Kyiv, which spewed radioactive waste over much of Europe when it melted down in 1986. The Zaporizhzhia plant is a different and safer type, some analysts said.