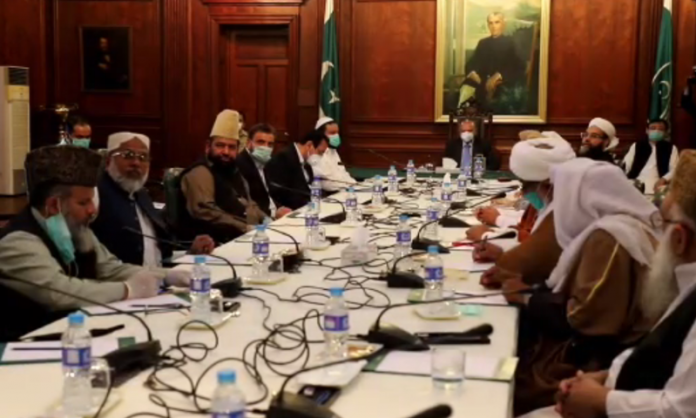 ISLAMABAD: Religious scholars assured that they would “comply with the instructions” issued by the government in order to curb the coronavirus pandemic during a meeting with President Arif Alvi on Thursday.
According to a statement released by the President’s office after the meeting, the Ulema also promised to extend their “complete support” to the government in its efforts to contain the spread of the novel coronavirus.
President Alvi had held a meeting with the scholars today to discuss if religious congregations, including Friday prayers, should be suspended during the coronavirus outbreak. The statement, however, made no mention of the matter.
“The president highlighted the preventive measures which needed to be taken by the people to stop spreading the disease,” the statement read. “He emphasised that the only solution to the present crisis was to maintain social distancing and act upon the guidelines provided by Islam to cope with such situation.
“The ulema assured their complete support and said that they would comply with the instructions given by the government.”
President Alvi chaired the meeting at President House. and scholars from all four provinces, Gilgit Baltistan (GB) and Azad Jammu and Kashmir (AJK) attended the meeting through video link from governor houses across the country. Those from Islamabad and Rawalpindi were physically present.
The president was supposed to apprise the scholars about the fatwa issued by Egypt’s Al-Azhar University, permitting suspension of Friday prayers to control the spread of the novel coronavirus across Pakistan.
He was expected to announce important decisions regarding these matters. Federal Minister for Religious Affairs and Interfaith Harmony Noorul Haq Qadri and Chairman of The Council of Islamic Ideology Dr Qibla Ayaz were advising the president on the matter.
Authorities have held multiple consultations with scholars over whether prayer congregations should continue, as social distancing is vital to curb the spread of the novel coronavirus, which has already infected more than 1,000 people in the country. A large number of people are expected to gather in mosques tomorrow to attend Friday’s congregational prayers.
Yesterday, in a meeting with Sindh governor at the Governor House, scholars agreed that people should take precautionary measures and vulnerable people should preferably offer prayers at home, but said that mosques should be kept open for congregations.
Earlier, President Alvi, through Egypt’s ambassador in Pakistan, had sought guidance from Al-Azhar institution, an authority on Islamic injunctions, for a word on the suspension of congregational prayers at mosques amid the spike in coronavirus cases.
The institution issued an edict on the matter yesterday, in which it stressed that public gatherings, including congregational prayers at mosques, could result in the spread of coronavirus and the governments of Muslim countries had full jurisdiction to cancel such events.
The fatwa also emphasised on amending the Azaan (call to prayer) with words ‘Salaat Fi Buyut-e-kum’, meaning ‘pray in your homes’ instead of the usual ‘Hayya Ala Al Salah’ (come to prayer). Also, families within their homes can arrange group prayers, it added.