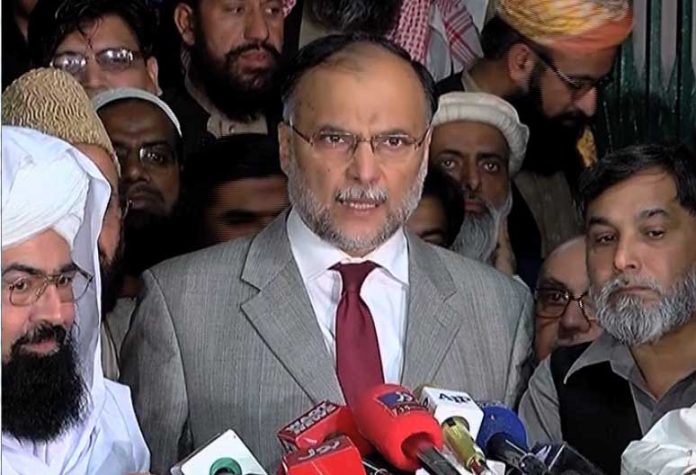 ISLAMABAD: Minister for Interior, Ahsan Iqbal on Monday said Ulema’s Dialogue Committee has been formed to resolve Tehreek Labaik Ya Rasool Allah (SAW) sit-in issue through negotiations in a peaceful manner.
Talking to journalists after attending a meeting with Ulema and Mashaikh, he said, the Committee, having members from all schools of thought, would be headed by Pir Hussain-ud-Din.
“We all have consensus that Dharna (sit-in) issue in Federal Capital should be resolved through dialogues with protestors and amicable solution be found,” Ahsan Iqbal said and added Pakistan cannot afford this disorder any longer.
The Minister said the meeting commended approval of law for Finality of Prophethood (SAW) by Parliament and termed it as historical.
Reading out a declaration of the meeting, Minister for Religious Affairs, Sardar Muhammad Yousaf said the Committee has demanded that recommendations of Raja Zafar-ul-Haq committee be made public.
He said the meeting appealed that issue of Dharna be resolved through dialogues so that sufferings of more than 0.8 million citizens of twin cities of Rawalpindi and Islamabad be ended. The citizens have been facing hardships for the last two weeks.
The Minister said basic objective of constituting the Dialogue Committee is to find better and comprehensive solution of the issue.
Replying to a question, Ahsan Iqbal said, the government would extend all support and cooperation to Dialogue Committee, hoping the other side (protestors) would also respond in a same manner.
The Committee of Raja Zafar-ul-Haq had held more than 126 meetings, he said, asking the committee to present its report after completing its assigned task.
Answering another question, Ahsan Iqbal said majority of Ulema and Mushaikh attended the meeting, however, some Ulema residing in other cities could not attend. …APP