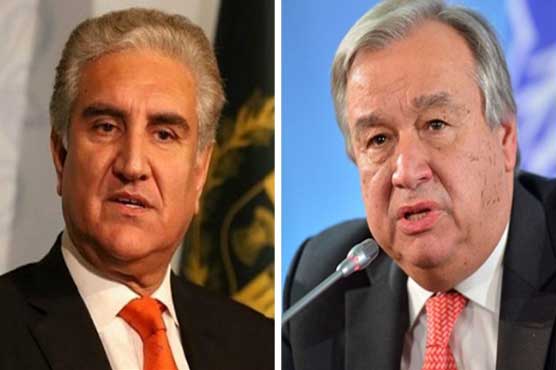 ISLAMABAD: United Nations Secretary General Antonio Guterres says the world body is watching the alarming situation in Occupied Kashmir and his organization will continue playing its role in this regard.
He was talking to Foreign Minister Shah Mehmood Qureshi who called him to discuss the continuing gross human rights violations in Occupied Jammu and Kashmir.
Shah Mehmood Qureshi said regional peace situation has become precarious after the unilateral steps taken by India in Occupied Kashmir.
He said India has put the whole area under complete lock down and communications are banned.
Foreign Minister said Indian steps violate the UN resolutions and contravene the international laws.
Shah Mehmood Qureshi told the UN Secretary General that a delegation of Indian opposition led by Rahul Gandhi was forced to return from Srinagar airport after it arrived to assess the situation of Occupied Kashmir.
Foreign Minister said the reports emerging from international media and international human rights organizations about situation in Occupied Kashmir are alarming.