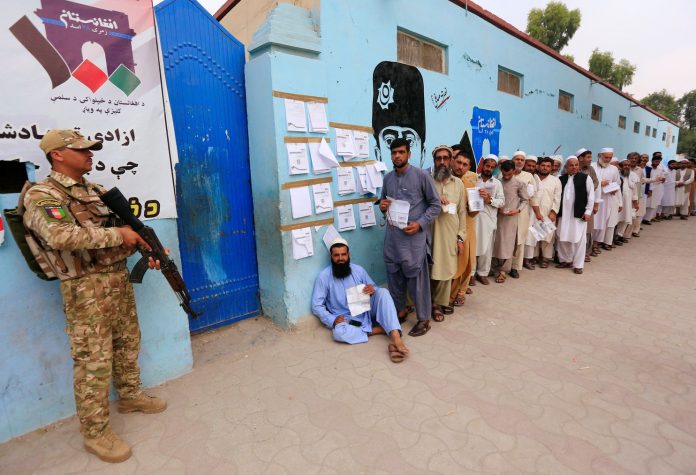 KABUL: Afghanistan’s presidential election turnout is unofficially estimated at just over two million people or about 20 per cent of registered voters, an official said on Sunday, amid concern that low participation could mar the vote.
Roughly seven million turned out to vote in the last presidential election in 2014.
Tight security ensured the election took place on Saturday in relative calm, but low turnout and complaints about the voting system heightened concerns that an unclear result could drive the war-torn country into further chaos.
“Turnout appears to have been dampened not just by Taliban threats, but also voter disinterest,” wrote Thomas Ruttig and Jelena Bjelica of the Afghanistan Analysts Network.
Afghan Taliban fighters attacked several polling stations across the country to try to derail the process, but intense security prevented large-scale violence.
There were more than 400 attacks, mostly small-scale, carried out by the militants, according to the Afghanistan Analysts Network.
There were also technical shortcomings, they wrote, including biometric devices not working, missing voter names and election material sent to the wrong province.
Many Afghans, however, did brave the threat of militant attacks to vote in an election seen as a major test of the Western-backed government’s ability to protect democracy against Afghan Taliban attempts to derail it.
As many as eight election staff were kidnapped on Saturday evening by the Afghan Taliban in central Parwan province’s Shinwari district, the provincial governor’s spokeswoman said.
“The local government and tribal elders are working to release them,” she said on Sunday.
Two policeman and one civilian were killed in mostly small-scale Taliban attacks, and 37 people were injured, the interior ministry said.
Of 9.67 million registered voters, only about one in five cast their ballot, according to the election commission official who requested anonymity as they were not authorised to release a turnout figure.
Previous elections were marred by dozens of deaths, accusations of fraud and allegations that the election commission was not independent. Memories of those issues hung over Saturday’s vote.
The days after voting are also fraught. The Afghan Taliban often attack those transporting ballot boxes from local voting centres to larger regional offices for counting. From there, the boxes make their way to the capital Kabul.
Preliminary results are not expected before October 19 and final results not until November 7.
If no candidate gets over half of the votes, a second round will be held between the two leading candidates. …Agencies