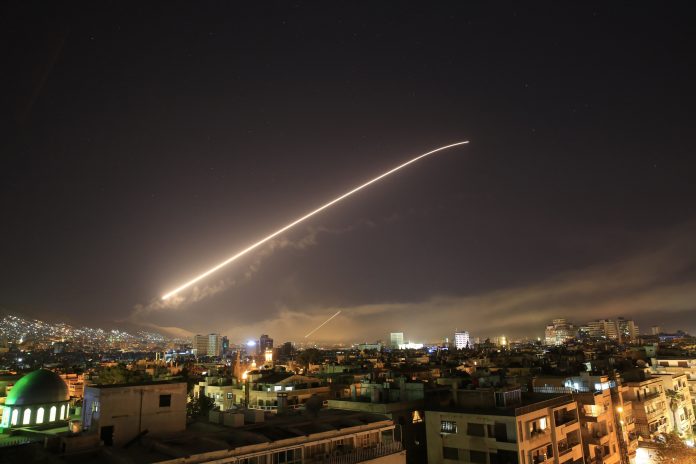 DAMASCUS: Western strikes early on Saturday hit Syrian military bases and chemical research centres in and around the capital, a monitor said, as the United States (US) announced a joint operation against the Damascus government.
“The Western coalition strikes targeted scientific research centres, several military bases, and the bases of the Republican Guard and Fourth Division in the capital Damascus and around it,” said the Britain-based Syrian Observatory for Human Rights.
The US, France, and Britain announced a joint operation against Syria’s government, a week after a suspected chemical attack outside the capital Damascus left more than 40 people dead.
The world leaders announced that the strikes targeted positions linked to the chemical weapons facilities of the Syrian government.
Moments after the announcement, loud blasts could be heard from the capital and large plumes of smoke emerged from its northern and eastern edges.
Syrian state media reported the joint operation and said there was preliminary information that a research centre northeast of the capital had been hit.
Since then, the Kremlin has condemned Western air strikes on Syria where its armed forces are backing President Bashar al-Assad.
“Russia severely condemns the attack on Syria where Russian military are helping the lawful government in the fight with terrorism,” the Kremlin said in a statement, its first reaction to the strikes.
Russia also said that is calling an emergency session of the United Nations Security Council — where it is a permanent member — over Western strikes on Syria.
“Russia is calling an emergency session of the UN Security Council to discuss the aggressive actions of the US and its allies,” the Kremlin said in a statement.
The US and Europe have both slapped sanctions on the Syrian Scientific Studied and Research Centre for its links to chemical weapons production in Syria.
Syria’s government denounced the strikes on its military installations as a “brutal, barbaric aggression” that violated international law.
“The Syrian Arab Republic condemns in the strongest terms the brutal American-British-French aggression against Syria, which constitutes a flagrant violation of international law,” the foreign ministry said.
State news agency SANA also reported the attack, but said it was “doomed to fail”.
Western powers blamed President Bashar al-Assad, but Syria and its ally Russia categorically denied the claims and accused the West of “fabricating” the incident to justify military action.
The Organisation for the Prohibition of Chemical Weapons was set to begin its investigation inside the Eastern Ghouta town of Douma on Saturday, just hours after the strikes.
Syria’s foreign ministry said the strikes aimed to block their work.
“The timing of the aggression coincides with the arrival of the OPCW mission to Syria to investigate the alleged chemical attack in Douma, and mainly aims at hindering the mission’s work and preempting its results,” it said in comments carried by state news agency SANA.
The ministry said it was an “attempt to block the exposure of their lies and fabrications”.
It said the United States, Britain and France launched around 110 missiles on Syria, but air defences shot most of them down.
The Russian military also said that Syrian air defence systems intercepted 71 out of 103 cruise missiles that were launched.
An ally of the Assad regime, Russia reacted with fury at West’s strikes on Syria and called for an emergency session of the United Nations Security Council. In a statement, Kremlin said that it “severely condemns the attack on Syria where Russian military are helping the lawful government in the fight with terrorism”.
Russia’s ambassador to the US, Anatoly Antonov also warned that “such actions will not be left without consequences”.
The Iranian government, another Syrian ally, called the attacks a “clear violation of international rules and laws” while Supreme Leader Ayatollah Ali Khamenei termed the US President Donald Trump, France’s Emmanuel Macron and Britain’s Theresa May as “criminals”.
Three civilians were wounded in the Homs attacks, the Syrian ministry said, but it did not give a toll for Damascus or mention any combatant casualties.
Lebanese movement Hezbollah, an ally of the Syrian regime, sharply condemned the strikes, saying the attackers would not achieve their objectives.
“America’s war against Syria, and against the region’s peoples and resistance movement, will not achieve its aims,” the group said in a statement published on its War Media Channel.
Several missiles hit a research centre in Barzeh, north of Damascus, “destroying a building that included scientific labs and a training centre,” SANA reported.
State media published images of a cloud of reddish smoke hanging over the capital and said that air defences were activated to block the attack.
But it said skies were clear over Aleppo in the north, Hasakeh in the northeast, and Latakia and Tartus along the western coast, where key Syrian and Russian military installations are located.