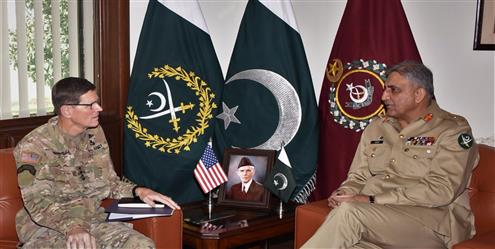 RAWALPINDI: Commander United States Central Command (US CENTCOM) General Joseph L. Votel. Thursday called on Chief of Army Staff (COAS) General Qamar Javed Bajwa.
“Discussion focused on regional security situation / Afghanistan, Pak-Afghan border management and Pakistan’s positive contributions towards peace and stability in the region,” said an Inter Services Public Relations (ISPR) press release here.
The COAS said peace in Afghanistan was more important for Pakistan than any other country.
Pakistan, he added, had done its best despite constraints and would continue efforts for the sake of its future, in line with the aspirations of Pakistani people, however, the same was not being reciprocated as evident from the continued attacks from across the border.
The visiting dignitary appreciated and acknowledged the Pakistan Army’s contributions and Pakistan’s sacrifices in the war against terror.