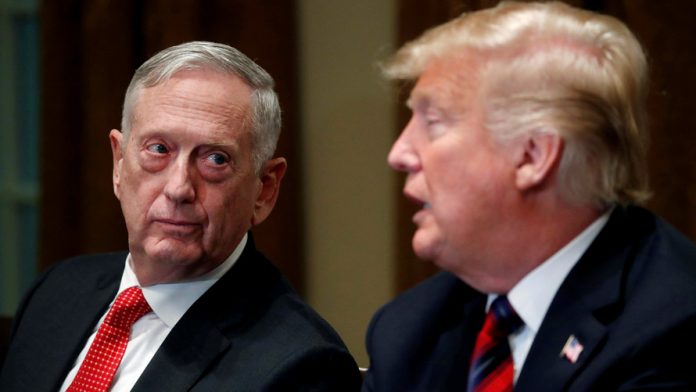 WASHINGTON: Defense Secretary Jim Mattis resigned Thursday, a day after President Donald Trump stunned the US establishment by ordering a troop withdrawal from Syria.
In a letter to Trump, the 68-year-old Pentagon chief said his political outlook, which cherishes traditional alliances, could no longer be reconciled with that of the president, who has poured scorn on longstanding partnerships and repeatedly sought closer ties with Russia.
“My views on treating allies with respect and also being clear-eyed about both malign actors and strategic competitors are strongly held and informed by over four decades´ immersion in these issues,” Mattis wrote.
“Because you have the right to have a Secretary of Defense whose views are better aligned with yours on these and other subjects, I believe it is right for me to step down from my position.”
Moments before the Pentagon released Mattis´s letter, Trump tweeted that his defense secretary would be “retiring with distinction, at the end of February.”
“General Mattis was a great help to me in getting allies and other countries to pay their share of military obligations. A new Secretary of Defense will be named shortly. I greatly thank Jim for his service!” Trump tweeted.
Trump´s administration has been marked by a steady hemorrhage of cabinet members and top advisors, and Mattis, whom Trump once affectionately referred to as one of “my generals”, was long rumored to have lost influence with the president.
But news of his departure, which he broke to stunned Pentagon staff earlier in the afternoon after meeting with Trump at the White House, still came as a shock to Washington.
“This is scary,” Democratic Senator Mark Warner said.
“Secretary Mattis has been an island of stability amidst the chaos of the Trump administration.”
Republican Senator Marco Rubio said Mattis´s resignation letter “makes it abundantly clear that we are headed towards a series of grave policy errors which will endanger our nation, damage our alliances (and) empower our adversaries.”
And Senator Susan Collins, another Republican, said Mattis´s resignation “is a real loss for our nation, our troops, and this administration.”
Trump´s decision to pull the 2,000 or so US troops out of Syria was a stunning rebuke to Mattis, who had warned that an early withdrawal from Syria would be a “strategic blunder.”
Experts say IS has not been defeated. The group still holds pockets of land in east Syria and thousands of jihadists are thought to remain.
Earlier Thursday, the Wall Street Journal reported that Trump was considering a draw down of US forces in Afghanistan — the exact opposite of what Mattis had pushed for.
Trump and Mattis have previously clashed on any number of other issues — including the Iran nuclear deal, which Trump pulled out of in May while Mattis defended parts of it.
The Pentagon chief was also against the creation of a separate new branch of the US military called Space Force, but Trump ordered it anyway.
Meanwhile, the biggest deployment Mattis has ordered so far was one to the US border with Mexico, a mission with only vague military utility and one that critics have assailed as a political stunt by Trump.
Mattis´s fate has been the subject of intense speculation for months but reached fever pitch in September, when veteran journalist Bob Woodward published a book giving an inside glimpse into a chaotic White House.
He said Mattis had questioned Trump´s judgment, likening his understanding to that of a 10- or 11-year-old child.
Mattis, a buttoned-up former Marine Corps general, was loath to discuss politics or his relationship with Trump, and the president was widely reported to bristle at unfavorable comparisons to Mattis, who had broad bipartisan support.
The Pentagon chief would regularly stop by reporters´ desks or speak outside the building, but he never gave any inkling of if or when he might step down.
It was not immediately clear who might replace Mattis.
Senator Tom Cotton, a staunch Trump ally and former Army officer, is often mentioned as a possible candidate. …Agencies