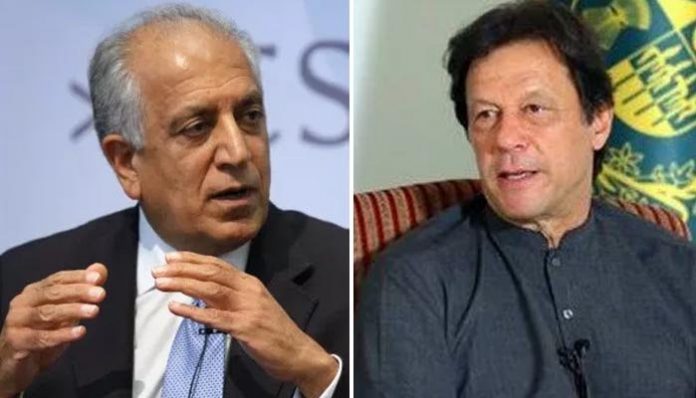 WASHINGTON: US Special Representative for Afghanistan Reconciliation Zalmay Khalilzad has praised Prime Minister Imran Khan’s statement on Afghanistan.
“Greatly appreciate @ImranKhanPTI’s statement yesterday on #Afghanistan. His appeal for reduction of violence and policy against promoting internal conflict in other nations has potential to positively transform the region and give #Pakistan a leading role,” Khalilzad tweeted on Friday.
In his statement, Prime Minister Imran Khan said Pakistan would not be a party to any internal conflict in Afghanistan anymore. The prime minister added that Pakistan was fully supporting the Afghan peace process including the intra-Afghan dialogue.
“Pakistan has committed all diplomatic and security capital to success of peace process,” Prime Minister Imran Khan said in the statement.
Last month, Afghanistan recalled its ambassador from Islamabad after Prime Minister Imran Khan was quoted in the local media suggesting the formation of an interim Afghan government that would smooth peace talks between US and Taliban officials. The premier was quoted as saying to Pakistani journalists that the Afghan Taliban wanted to meet him but the government in Kabul protested so he did not meet them.
Later at a rally, Prime Minister Khan explained his comments as “brotherly advice” to the people and government of Afghanistan and should not be considered interference.
Pakistan’s Ministry of Foreign Affairs also stated that the prime minister’s comments were reported out of context. Foreign Office spokesperson Dr Mohammad Faisal said the prime minister had referred to Pakistan’s model, where elections are held under an interim government and said his comments should not be misinterpreted to imply interference in Afghanistan’s internal affairs.
The spokesperson said Pakistan has no other interest in Afghanistan, but to promote peace through an Afghan-owned and Afghan-led political process.