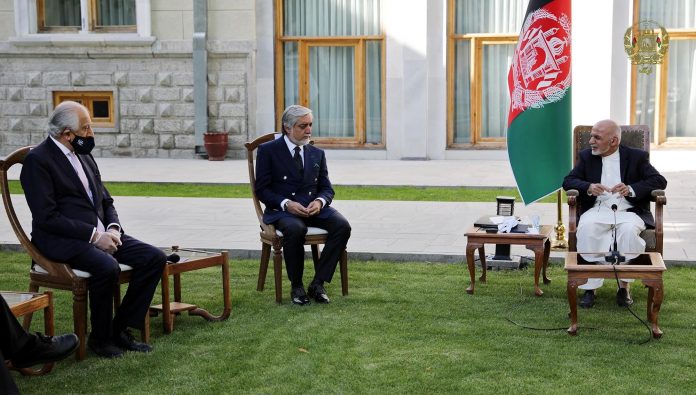 KABUL: US Special Envoy for Afghan Reconciliation Zalmay Khalilzad on Thursday urged for a reduction in violence by all sides in Afghanistan.
The envoy, Afghan-born Zalmay Khalilzad, the architect of a February agreement with the Taliban clearing the way for a US troop withdrawal, met Taliban leaders in Doha on Wednesday, hours after meeting government leaders in Kabul.
“‪On violence, I told the Talibs, violence by all sides must fall,” Khalilzad said on Twitter.
Violence has surged in recent days after a bloody militant raid in Kabul, which the Taliban denied responsibility for, triggered an Afghan government order for its forces to go on the offensive.
Clashes have erupted in several parts of the country with dozens killed.
The main element of the February 29 agreement between the United States and the Taliban was the withdrawal of US-led foreign forces in exchange for Taliban security guarantees.
A Taliban ceasefire was not part of the pact though the militants, fighting since their 2001 ouster to expel foreign troops and bring back Islamic rule, promised to enter power-sharing talks with the US-backed government.
But peace efforts have stalled over a disagreement on an exchange of prisoners.
Khalilzad said he met Taliban leaders, including political chief Mullah Abdul Ghani Baradar, and discussed the prisoner release and reducing violence.
Taliban leader Haibatullah Akhundzada on Wednesday released a statement for the Eid-ul-Fitr holiday calling for progress on peace but also telling his fighters to stay “focused on their objectives” and “consolidate … ranks”, which government security officials criticised as inciting violence.
Earlier on Wednesday, Khalilzad met Afghan President Ashraf Ghani and his former rival Abdullah Abdullah.
Ghani and Abdullah signed an agreement to share power on Sunday, ending a months-long impasse over a disputed election, and raising hopes that the government would now focus on the US-brokered peace process effort.