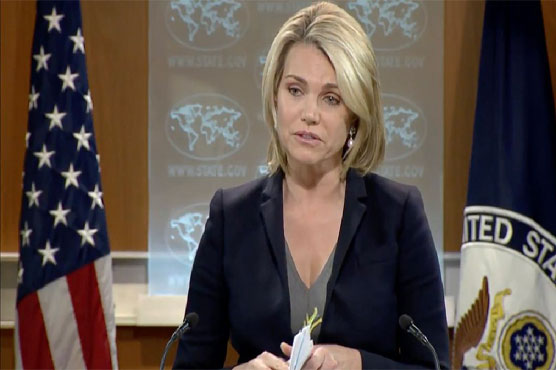 WASHINGTON: The United States said Wednesday it was imposing new sanctions on Russia over Moscow s involvement in the use of a “lethal” nerve agent in the attempted killing of a former spy in Britain.
The State Department said the sanctions were in response to “the use of a Novichok nerve agent in an attempt to assassinate UK citizen Sergei Skripal” — who was a double agent — and his daughter Yulia in March.
The action is aimed at punishing President Vladimir Putin s government for having “used chemical or biological weapons in violation of international law,” State Department spokeswoman Heather Nauert said in a statement.
The new sanctions were to take effect following a 15-day Congressional notification period, she said.
Another senior State Department official told reporters that the administration decided to impose a “presumption of denial” for the sale to Russia of “national security sensitive” US technologies that require federal government approval.
Such technologies have often been used in items including electronic devices as well as calibration equipment. The exports were previously allowed on a case-by-case basis.
The move could cut off hundreds of millions of dollars worth of exports to Russia, said the official, who requested anonymity in order to speak about the sanctions.
House Foreign Affairs Committee chairman Ed Royce, who had pushed months ago for Trump to take action over Russia s use of banned weapons, applauded the move as “key to increasing pressure on Russia.”
“Vladimir Putin must know that we will not tolerate his deadly acts, or his ongoing attacks on our democratic process,” Royce said.
Sanctions waivers are in place for certain key sectors, including space flight activities and commercial aviation safety, the official said.
The action follows the US Treasury s imposition of sanctions in March against 19 Russian citizens and five entities for interfering in the 2016 US election — the toughest steps against Moscow since President Donald Trump took office.
Also in March, Washington ordered the expulsion of 60 Russian diplomats, and the closure of Russia s consulate general in Seattle.
Moscow ordered 60 American diplomats expelled in a tit-for-tat response.
Sergei and Yulia Skripal were found unconscious on a bench in Salisbury, England, on March 4, having been poisoned by Novichok, a military-grade nerve agent developed by the Soviet Union during the Cold War.
They were critically ill, but survived after spending weeks in the hospital.
Russia has strongly denied playing a role in the attack.
On June 30, a British couple were poisoned by Novichok in a nearby town — 44-year-old mother-of-three Dawn Sturgess subsequently died.
London and its allies have accused Moscow of trying to kill the Skripals and says the two cases are likely linked.
The new announcement could bolster Trump s claim that his administration is taking a tough stance on Moscow, even as he denounces special counsel Robert Mueller s Russia probe as a “witch hunt” that ought to be halted immediately.
Trump caught flak from Democrats and Republicans alike for what many saw as his unsettling embrace of Putin last month at their Helsinki summit, when Trump appeared to disavow his own intelligence agencies assessment on Moscow s election interference.
The new US sanctions come amid increasing frustration with Trump s handling of Russia, and how he apparently needed congressional prodding to impose the new penalties.
The sanctions are mandated under the Chemical and Biological Weapons and Warfare Elimination Act of 1991, which says the US president shall tighten the penalties within 90 days unless Moscow provides “reliable assurances” that it no longer engages in such activities, and allows on-site inspections by United Nations observers.
The second round of sanctions could cut far deeper, including blocking all American bank loans to Russian entities, an outright ban on US exports to Russia, and suspension of diplomatic relations.
The announcement in Washington was likely to intensify troubles for the ruble, which took a hit Wednesday along with the stock market over rumors of separate new tough US sanctions over election meddling.
But the Russian finance ministry, quoted by Ria-Novosti news agency, sought to allay fears, saying the measures ultimately might not be put in place, though it acknowledged that markets were “once again under pressure.”
The latest mixed messages over Russia involve a letter from Trump that Republican US Senator Rand Paul delivered to Putin during a visit to Moscow this week.
Paul said the letter “emphasized the importance of further engagement in various areas including countering terrorism, enhancing legislative dialogue and resuming cultural exchanges.”
The White House said Trump provided “a letter of introduction” at Paul s request, and that the president “mentioned topics of interest that Senator Paul wanted to discuss with President Putin.” …Agencies