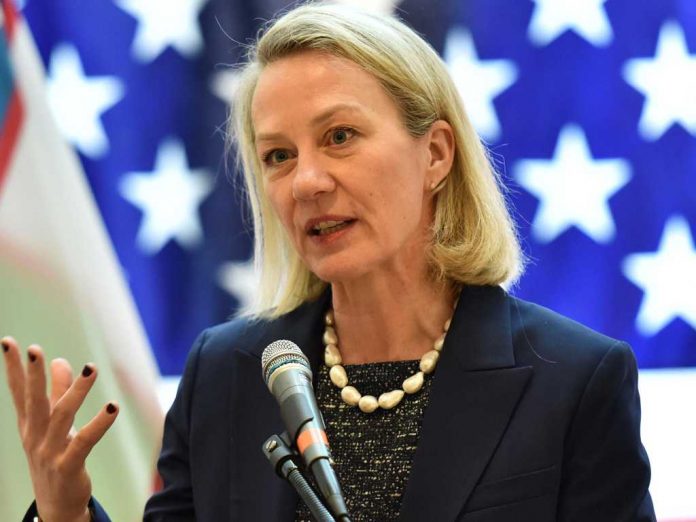 WASHINGTON: Outgoing Principal Deputy Assistant Secretary of State for South and Central Asian Affairs Alice Wells on Wednesday praised Pakistan’s support for the Afghan peace process and actions against militant groups, saying Islamabad’s commitment to peace in the region has grown.
Pakistan, she said, had taken constructive steps to encourage the Taliban to advance the Afghan peace process, besides taking action against other groups such as arresting and prosecuting Lashkar-e-Taiba leader Hafiz Saeed and beginning to dismantle terror financing structures.
Wells, a career diplomat who has served as acting assistant secretary of state for South and Central Asia for most of the Trump administration’s tenure, said during the last three years, Pakistan’s relations with the United States had improved, particularly in trade.
Speaking about the Afghan peace deal, Wells said after over a year of talks, the US and Taliban signed a peace deal in which the Taliban committed to bringing down violence in the country.
The US was upholding its commitment and closely looking at the situation, she said, adding that an increased volume of violence in Afghanistan was unacceptable.
The ambassador, who would now be replaced by another veteran diplomat Tom Vajda, said the US welcomed the formation of an inclusive government in Afghanistan by President Ashraf Ghani and Abdullah Abdullah.
The US was looking for rapid implementation of the mutual agreement and immediate steps to reach the much-awaited intra-Afghan negotiations.
Responding to a question, the ambassador said it was deeply in Pakistan’s interest to advance the Afghan peace process.
“As per their commitment, the US had seen solid cooperation from Pakistan’s civil and military leadership towards the Afghan peace talks,” she said.
She added that the peace process achieve success during the next five years.
However, regarding terror activities such as the recent ones by Daesh, Wells said both the Afghan government and the Taliban should commonly fight such groups.