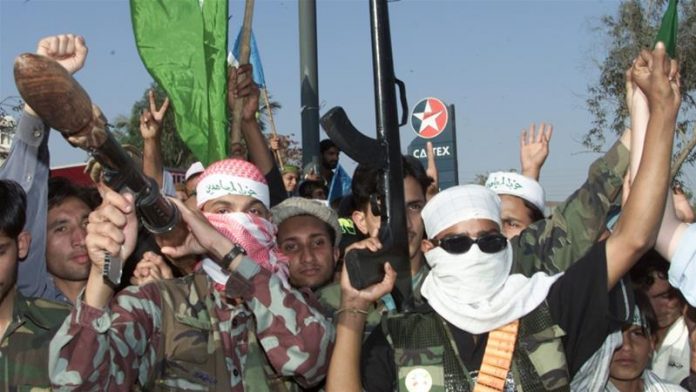 WASHINGTON: The United States has designated Hizbul Mujahideen, the largest armed group in Indian-administered Kashmir, as a “foreign terrorist” organisation, imposing sanctions on it including the freezing of assets it may hold in the US.
The US Department of State said in a statement on Wednesday that Washington is seeking to deny the group “the resources it needs to carry out terrorist attacks”.
“Terrorism designations expose and isolate organisations and individuals, and deny them access to the US financial system. Moreover, designations can assist the law enforcement activities of US agencies and other governments.”
Hizbul Mujahideen is the largest indigenous armed group fighting against Indian rule in the Himalayan territory since an armed rebellion broke out in 1989.
In June, the US had also designated as “terrorist” the group’s leader Syed Salahuddin, also known as Mohammad Yusuf Shah.
In July 2016, the killing of Hizbul Mujahideen leader Burwan Wani sparked months of anti-India protests in which scores of people died.
Kashmir has been divided between India and Pakistan since the end of British rule in 1947. Both claim the disputed territory in its entirety.
Several armed rebel groups are fighting against Indian rule in Kashmir, with tens of thousands of people, most of them civilians, killed in the nearly three decades-old conflict.
Anti-India sentiment runs deep in Kashmir’s predominantly Muslim population, and most people support the fighters’ cause against Indian rule.
Nearly 70,000 people have been killed in the uprising and the ensuing Indian military crackdown.
In recent years, Kashmiris, mainly young people, have displayed open solidarity with anti-Indian fighters and sought to protect them by engaging troops in street clashes during military operations.
The anti-India protests and clashes have persisted despite the Indian army chief warning recently that “tough action” would be taken against stone throwers during counter attacks.
India accuses Pakistan of arming and training the fighters, which Pakistan denies. – Agencies