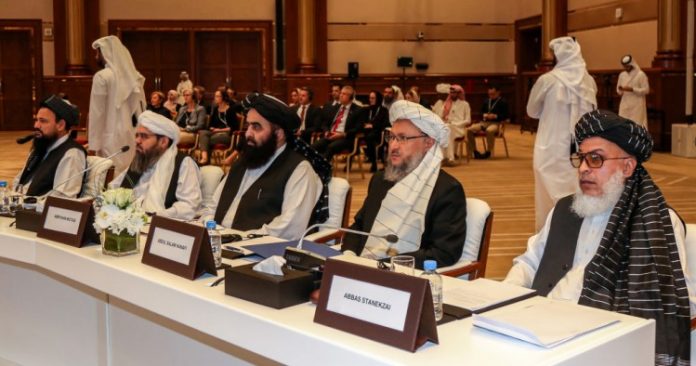 DOHA: Top US officials met with leaders of the Afghan Taliban in Qatar’s capital Doha and discussed implementation of the peace agreement signed between Washington and the Taliban in February, the Taliban said Tuesday.
According to Suhail Shaheen, a spokesman for the Taliban’s political office in Qatar, a Taliban delegation led by Mullah Baradar, deputy chief of the group and head of its political office, met late Monday with US Special Representative for Afghanistan Reconciliation Zalmay Khalilzad and General Scott Miller, the top US commander in Afghanistan.
The meeting was hosted by Mohammed bin Abdulrahman Al-Thani, Foreign Minister and Deputy Prime Minister of Qatar.
“They talked about the complete implementation of the agreement as well as the delay in the release of prisoners,” Shaheen said in a statement.
Violations of the agreement and other issues, as well as ways to fully implement the agreement, were also discussed, he added.
On Monday, the US State Department issued a brief statement saying Khalilzad will meet with Taliban representatives to discuss current challenges in implementing the US-Taliban Agreement.
On April 5, the Taliban threatened to resume full-scale attacks if the Doha peace agreement was not honored.
“We are honoring the peace agreement. However, the American side and their internal and external military supporters have been targeting civilian populations and Taliban centers that are not even on the battlefield,” the group said.
The process of releasing 5,000 prisoners has also been delayed due to indefensible arguments, the group said.
On April 7, the Taliban announced that it was pulling its technical team out of prisoner exchange talks with the government.
But on Friday, Gen Miller met with Taliban leaders in Qatar to discuss the group’s reservations.
Following the meeting, the Taliban released 20 government prisoners Sunday and handed them over to the International Committee of the Red Cross in southern Kandahar province.
In response, the Afghan government also freed 100 more Taliban prisoners, bringing the number of Taliban inmates freed by the Afghan government to over 300.
The Taliban have demanded the release of 5,000 of their militants in return for the release of 1,000 captives, including Afghan government officials and security personnel.
The Afghan government, however, insists on releasing them in phases along with intra-Afghan talks and a ceasefire in place. …Agencies