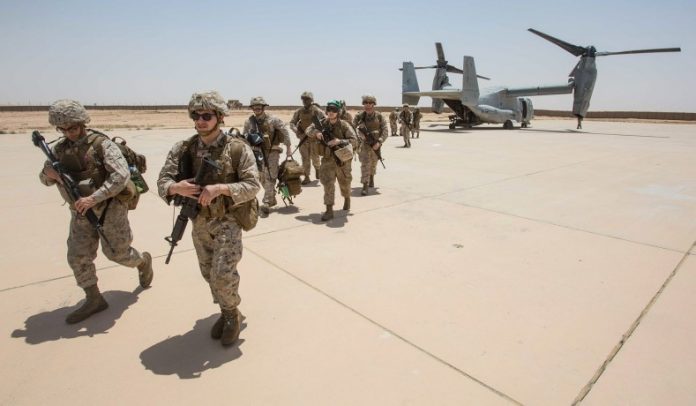 WASHINGTON: The United States on Friday rejected a request by Iraq to start talks on pulling out its 5,200 troops, notching up the discord after Washington killed a top Iranian general in Baghdad.
Angry at an attack seen as violating Iraqi sovereignty and enmeshing the country again in war, Iraq’s caretaker prime minister asked Secretary of State Mike Pompeo late Thursday to send a delegation to begin withdrawal arrangements.
The State Department said it was ready for “a conversation” — but not about removing troops.
“At this time, any delegation sent to Iraq would be dedicated to discussing how to best recommit to our strategic partnership — not to discuss troop withdrawal, but our right, appropriate force posture in the Middle East,” State Department spokeswoman Morgan Ortagus said in a statement.
Calling the United States “a force for good,” she said: “We want to be a friend and partner to a sovereign, prosperous and stable Iraq.”
President Donald Trump has described the 2003 US invasion of Iraq as a mistake and in the past criticized US troop deployments, in Iraq and elsewhere, as wasteful.
Nonetheless, he has responded angrily to Iraqi efforts to expel US troops, even threatening sanctions on a country promoted as a US partner.
Pompeo, speaking to reporters, said that US troops mission in Iraq was “very clear” — training local forces and fighting the Islamic State extremist group.
“As times change and we get to a place where we can deliver up on what I believe, and the president believes, is our right structure, with fewer resources dedicated to that mission, we will do so,” he said.
Iraqi leaders were infuriated by the US drone strike at Baghdad s airport that killed Iran s most prominent general, Qasem Soleimani, on January 3 and parliament voted on Sunday to rescind an invitation to foreign troops.
Caretaker prime minister Adel Abdel Mahdi, in his call to Pompeo, “requested that delegates be sent to Iraq to set the mechanisms to implement parliament s decision for the secure withdrawal of (foreign) forces from Iraq,” Abdel Mahdi s office said in a statement.
But Abdel Mahdi is in a weak position, staying in power in an acting capacity more than a month after resigning in the face of massive demonstrations.
Protests resumed Friday across the country, with protesters denouncing the influence both of the United States and Iran.
“Screw Iran! Screw America!” protesters cried out in the capital s iconic Tahrir Square, still lined with tents and stalls set up three months ago.
Fearing their movement would be eclipsed by war, Iraqi activists posted calls on social media in recent days for the mass protest on Friday, which marked the inverse date, 10/1, of the first rallies on October 1, or 1/10.
Protesters in the Shiite holy city of Karbala clashed overnight with security forces and others were arrested in Basra on Friday.
“By relaunching the protests, we re showing our commitment to the demands of the October revolution: that our leaders stop monopolizing our country s resources,” said Haydar Kazem, protesting in Nasiriyah. …Agencies