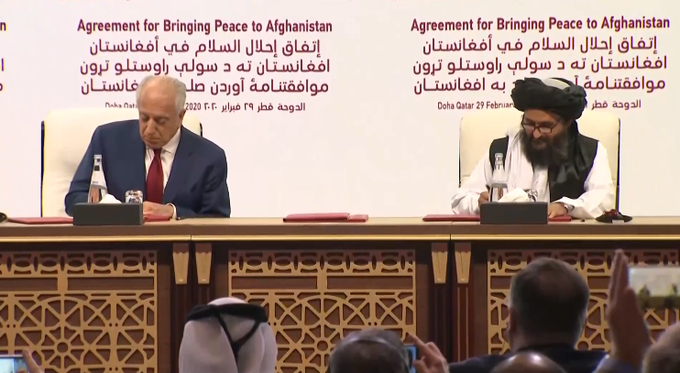 DOHA: The United States signed a landmark deal with the Taliban on Saturday, laying out a timetable for a full troop withdrawal from Afghanistan within 14 months as it seeks an exit from its longest-ever war.
US Special Representative Zalmay Khalilzad and Taliban cofounder Mullah Abdul Ghani Baradar signed the deal in Doha.
According to the accord, The United States and its allies will withdraw all their forces from Afghanistan within 14 months if the Taliban abide by an agreement due to be signed in Doha on Saturday, Washington and Kabul said in a joint statement.
After an initial reduction of troops to 8,600 within 135 days of Saturday s signing, the US and its partners “will complete the withdrawal of their remaining forces from Afghanistan within 14 months… and will withdraw all their forces from remaining bases”, the declaration stated.
President Donald Trump urged the Afghan people to embrace the chance for a new future, saying the deal held out the possibility of ending the 18-year conflict.
“If the Taliban and the government of Afghanistan live up to these commitments, we will have a powerful path forward to end the war in Afghanistan and bring our troops home,” he said on the eve of the event in Doha.

Also read: PM Imran always emphasized on dialogue for peace in Afghanistan: Asad
Secretary of State Mike Pompeo arrived in the Qatari capital to witness the signing of the accord, while Defence Secretary Mark Esper was in Kabul for a separate joint declaration with the Afghan government
The agreement, which could herald the start of a new era for Afghanistan after decades of conflict, is expected to also lead to a dialogue between the Kabul government and the Taliban that, if successful, could ultimately see the Afghan war wind down.
But the position of the Afghan government, which has been excluded from direct US-Taliban talks, remains unclear and the country is gripped by a fresh political crisis amid contested election results.
The deal, drafted over a tempestuous year of dialogue marked by the abrupt cancellation of the effort by US President Donald Trump in September, is expected to lay out a timetable for a US force withdrawal.

Also read: Pakistan hopes US, Taliban deal will set tone for peace in Afghanistan
“There s been so much speculation about the contents of the deal… we know the broad outlines but it s not even clear whether the full terms of the deal will be made public,” said Andrew Watkins, senior analyst at the International Crisis Group consultancy.
While Kabul will not be represented at the Doha signing, set for around 1100 GMT, it will send a six-person taskforce to the Qatari capital to make initial contact with the Taliban political office, established in 2013.
Qatar, a peninsula nation protruding from the Arabian desert into the Gulf and better known for its gas riches and controversial 2022 World Cup bid victory, was a seemingly unlikely choice to host negotiations.
But by providing neutral space for talks on ending the conflict it has boosted its international profile and helped it defy a painful regional embargo enforced by Saudi Arabia, which accuses it of being too close to Islamist movements.
Talks have taken place in a plush members club in Doha, where turbaned Taliban fighters-turned-negotiators and suited American officials have rubbed shoulders with club-goers in Hawaiian shirts and swimwear.
As many as 30 nations are expected to be represented at Saturday s signing in the Qatari capital. The US will stage a separate ceremony in Kabul with the Afghan government at 1215 GMT, an Afghan source told AFP.
The inking of the deal will come after a week-long, partial truce that has mostly held across Afghanistan aimed at building confidence between the warring parties and showing the Taliban can control their forces.
While isolated attacks have continued in rural areas, US Secretary of State Mike Pompeo said Tuesday that the truce period was “working”.
“We re on the cusp of an enormous, enormous political opportunity,” he said.
The US, which currently has between 12,000 and 13,000 troops in Afghanistan, could draw that number down to 8,600 within months of the agreement being signed.
Further reductions would depend on the Taliban s engagement with the government of President Ashraf Ghani, whom they have until now dismissed as a US-backed puppet.
“This is just a precursor to get that process started, it s not a cause for celebration among the government or its allies,” Watkins said.
Ghani has been declared winner of last year s elections, but his main rival, Abdullah Abdullah, is refusing to recognise the win and has vowed to set up a rival government.
Any insurgent pledge to guarantee Afghanistan is never again used by jihadist groups such as Al-Qaeda and Islamic State to plot attacks abroad will be key to the deal s viability.
The Taliban s sheltering of Al-Qaeda was the main reason for the US invasion following the 9/11 attacks.
The conflict has cost the US taxpayer more than $1 trillion in military and rebuilding costs since the US-led invasion of 2001.
More than 100,000 Afghan civilians have been killed or injured over the past decade, according to the United Nations. …Agencies