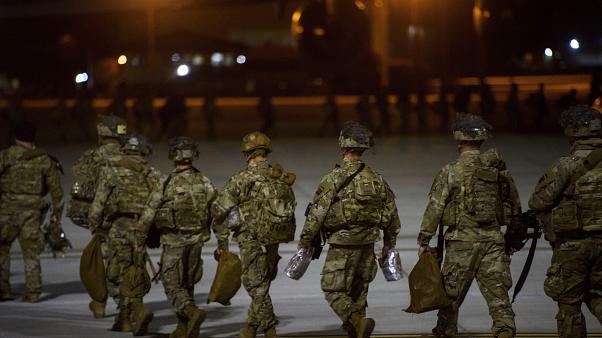 WASHINGTON: The United States plans to deploy at least 3,000 additional troops to the Middle East after Iran pledged to avenge the killing on Friday of one of its top military commanders in Baghdad.
Qasem Soleimani — the head of Iran s Revolutionary Guard Corps foreign operations arm — was targeted in what a US official said was a drone strike on his convoy near Baghdad s international airport.
The Pentagon said US President Donald Trump had ordered Soleimani s killing after a pro-Iran mob laid siege to the American embassy in the Iraqi capital earlier this week, throwing rocks and setting fires.
Iran s supreme leader Ayatollah Ali Khamenei swiftly promised “severe revenge” for the death of the military mastermind — the biggest escalation yet in what some fear could end up being a proxy war between Iran and the US on Iraqi soil.
As world leaders urged restraint from all sides, Iran s allies rallied behind the Islamic republic, and tens of thousands of angry protesters in Tehran torched US flags and chanted “Death to America.”
UN Secretary-General Antonio Guterres warned that the “world cannot afford” another Gulf war.
In Washington, a Pentagon official said 3,000 to 3,500 troops from the 82nd Airborne Division s Global Response Force, which already had sent hundreds of reinforcements earlier this week, will be deployed in the region.
“The brigade will deploy to Kuwait as an appropriate and precautionary action in response to increased threat levels against US personnel and facilities,” the official said.
US Secretary of State Mike Pompeo made the rounds of morning news programs to explain the strike, saying Soleimani had been planning an “imminent” attack that would have put “dozens if not hundreds of American lives at risk.”
Pompeo also engaged in a lightning round of telephone diplomacy, calling officials around the world to update them and lobby them for support.
Trump said Soleimani should have been killed “many years ago.” He was due to deliver a speech later Friday in Miami.
Early Friday, a precision drone strike struck two cars belonging to Iraq s Hashed al-Shaabi, a paramilitary force with close ties to Iran, as they drove away from Baghdad International Airport.
Hours later, the Revolutionary Guards announced that Soleimani, 62, had been “martyred in an attack by America.”
Five Guards were killed, along with five members of the Hashed, which confirmed its deputy chief Abu Mahdi al-Muhandis was among the dead.
Iran s Supreme National Security Council vowed that “these criminals will face severe vengeance… in the right place and time.”
The US embassy in Baghdad urged all American citizens to leave Iraq “immediately” and US nationals working at southern oil fields were being evacuated, Iraq s petrol ministry said.
Soleimani had served as Iran s pointman on Iraq, visiting the country in times of turmoil.
Khamenei swiftly named Quds Force number two Esmail Qaani to replace him.
Muhandis was the Hashed s deputy chief, but was widely recognized as the man calling the shots within the group.
Ceremonies to mourn both men will be held on Saturday, a day before Iraq s parliament is set to hold an emergency meeting.
A leading Hashed member, Hadi al-Ameri, urged lawmakers “to take a bold decision to oust foreign troops from Iraq, because their presence has become a threat for Iraqis.”
Some 5,200 US troops are stationed across the country.
Iran s Foreign Minister Mohammad Javad Zarif slammed the US strike as “extremely dangerous and a foolish escalation,” as Khamenei declared three days of mourning.
Iraqi Prime Minister Adel Abdel Mahdi said the strike was a “flagrant violation” of a security accord with the US, warning it would “spark a devastating war in Iraq.”
But paramilitary figures in Iraq including US-blacklisted Qais al-Khazali and militiaman-turned-politician Moqtada Sadr called on their fighters to “be ready.”
And in Lebanon, the leader of the Tehran-backed Shiite movement Hezbollah, Hassan Nasrallah, warned of “punishment for these criminal assassins.”
There were nevertheless daring celebrations in Baghdad s Tahrir Square, the epicenter of a three-month-old protest movement that has slammed the Iraqi government as corrupt and beholden to Tehran.
“Oh Qasem Soleimani, this is a divine victory,” demonstrators chanted as some danced in the streets.
And Israeli Prime Minister Benjamin Netanyahu praised Trump “for acting swiftly, forcefully and decisively,” as the Jewish state braced itself for possible reprisal attacks.
Analysts said the strike — which sent world oil prices soaring — would be a game-changer in the tensions between Iran and the US.
“Trump changed the rules — he wanted (Soleimani) eliminated,” said Ramzy Mardini, a researcher at the US Institute of Peace.
Phillip Smyth, a US-based specialist in Shiite armed groups, described the killing as “the most major decapitation strike that the US has ever pulled off.”
Ties between the US and Iran have deteriorated markedly since Washington abandoned a landmark nuclear deal with Tehran in 2018 and reimposed crippling sanctions.
On Tuesday, a mob of Hashed supporters surrounded the US embassy, angered by American air strikes that killed 25 fighters from the network s hardline Iran-backed Kataeb Hezbollah faction.
The US had acted in response to a rocket attack days earlier that killed an American contractor working in Iraq.
Trump had blamed Iran for the embassy siege and rocket attacks, saying: “They will pay a very BIG PRICE! This is not a Warning, it is a Threat.” …Agencies