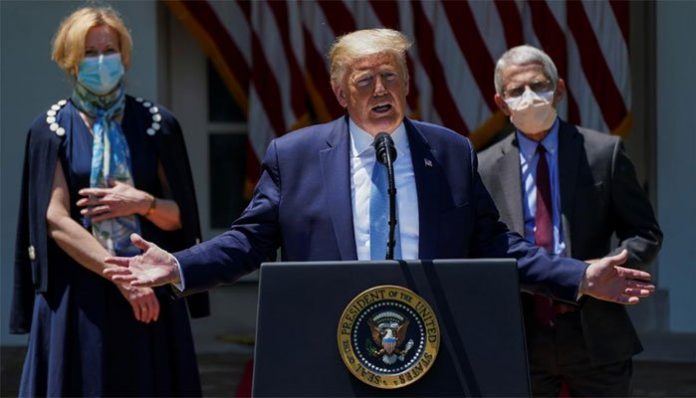 WASHINGTON: President Donald Trump has said the US government was working with other countries to develop, quickly, a vaccine to prevent infection by the coronavirus while also preparing for its distribution once one is ready.
At an event in the White House Rose Garden, in which many administration officials wore masks but the president did not, Trump expressed his hope that a vaccine would be in place before the end of the year, and said his administration would mobilise its forces to get a vaccine distributed.
Trump said the government would invest in all the top coronavirus vaccine candidates, and said a list had been narrowed to 14 promising potential vaccines with a plan to narrow further.
Former GlaxoSmithKline executive Moncef Slaoui, who Trump has tapped to help spearhead the vaccine effort, expressed optimism that progress would be made before the end of the year.
“I have very recently seen early data from a clinical trial with a coronavirus vaccine. And these data made me feel even more confident that we will be able to deliver a few hundred million doses of vaccine by the end of 2020,” he said.
Slaoui did not mention which vaccine, but one developed by Moderna Inc with help from the National Institutes of Health recently won approval from the US Food and Drug Administration (FDA) to advance to the next phase of clinical trials. Slaoui had been a Moderna board member before taking up his new US post.
Experts have warned that it would likely take 12 to 18 months or more to get a vaccine ready for the public. The president has sought to speed up that time frame while also playing down the need for a vaccine as he encourages US states to reopen their economies.
At his Rose Garden event the president made clear his view that the country could move on from the epidemic without one.
“Vaccine or no vaccine, we’re back,” Trump said.
The president, who took criticism for not coordinating with European countries over travel restrictions in the early stages of the pandemic, said the world was cooperating to develop a vaccine.
“We’ve got countries that are allies … we have some countries, frankly, that aren’t allies where we’re working very closely together,” Trump said. “We have no ego. Whoever gets it, we think it’s great. We’re going to work with them. They’re going to work with us.”
Trump’s vaccine effort has been dubbed “Operation Warp Speed” and involves the US government, military, and industry. In addition to Slaoui, the president said General Gus Perna, Commander of the US Army Materiel Command, would oversee logistics.
“While we accelerate the final phases of vaccine trials, Operation Warp Speed will be simultaneously accelerating its manufacturing and manufacturing process,” Trump said. “In other words, we’re getting ready so that when we get the good word — that we have the vaccine, we have the formula, we have what we need — we’re ready to go.”
Trump said the federal government would invest in the manufacturing of top vaccine candidates before they were approved. He said the effort would also include moves to ramp up production of supplies needed for the eventual distribution of a vaccine.
“When a vaccine is ready, the US government will deploy every plane, truck, and soldier required to help distribute it to the American people as quickly as possible,” he said.