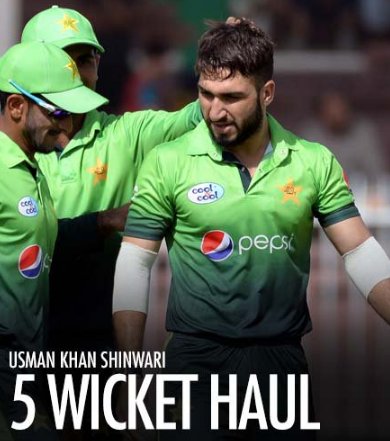 SHARJAH: Left-arm pacer Usman Khan Shinwari tore apart Sri Lanka top and middle order in the fifth and final ODI of the series at Sharjah today.
He struck in the very first over of the match to remove both Samarawickrama and Chandimal off consecutive balls.
He struck again in his next over to dismiss skipper Tharanga and Dickwella, reducing Sri Lanka to 27-5 after Sri Lanka won the toss earlier and decided to bat against Pakistan, who already lead the series by 4-0.
Coach Mickey Arthur made no secret of his intention of inflicting a clean sweep on Sri Lanka when the teams meet today. Since their ICC Champions Trophy 2017 triumph in June, Pakistan have won eight straight games and have been unstoppable in limited overs, having overcome the disappointment of losing the preceding Test series to Sri Lanka 2-0 to open up a 4-0 lead in this series.
Arthur believes his team has shown the hunger to keep winning. “I will be disappointed if we didn’t make it 5-0,” he said ahead of the match. “The guys are hungry and they definitely want to do that. The key for us is to maintain our hunger and ruthlessness so we need to keep that momentum and put this series to bed.”
Pakistan have previously achieved five clean sweeps, all in series involving five games. They blanked Zimbabwe in 2002-03, Bangladesh in 2003, New Zealand in 2003-04 and Zimbabwe and Bangladesh in the 2008 season.
Rumman Raees is out of the last match as well as the T20 series, Arthur said. The left-arm quick has injured his left elbow, Haris didn’t pass a fitness test in Abu Dhabi after he was pretty close to playing, Babar Azam has pulled a groin, the coach added.
Meanwhile, Sri Lanka will look to avoid 11th straight loss, three short of their worst ever run of 14 defeats in 1987. Nic Pothas, the Sri Lanka coach, urged the batsmen to start delivering. “It is pretty obvious. It is not rocket science,” he said, not for the first time during this series. “We just want the batters to be a little more positive about the way they go about things. We also understand we need to be in the right frame of mind to be there. So our job is to try and give the players the freedom to be able to play their way. It is going to be a very good wicket again and it is not the biggest boundary in the world.”
The ODIs will be followed by a three-match T20 series with the last of those games to be played in Lahore on October 29.