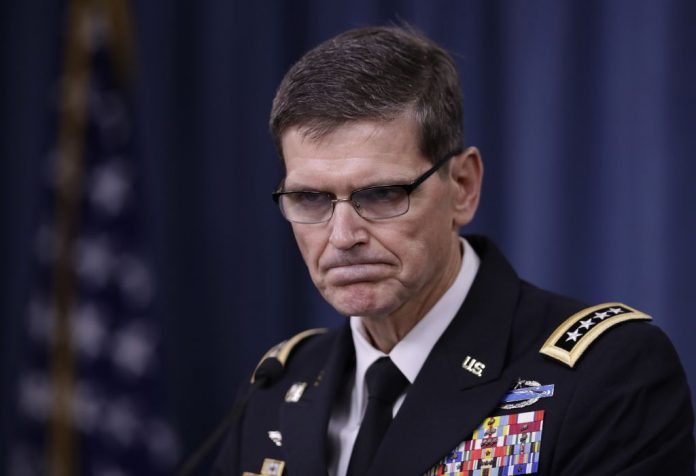 WASHINGTON: The United States is unlikely to make any big shift in military strategy as a result of an ongoing assessment of the war effort in Afghanistan, the top U.S. general overseeing forces in the region said on Thursday.
Reuters reported on July 10 that the United States was preparing to undertake a strategy review, a year after President Donald Trump begrudgingly agreed to extend America’s involvement in the conflict.
U.S. Army General Joseph Votel portrayed it more as a regular assessment than a wholesale review and suggested that he expected it would confirm progress, however uneven, in the nearly 17-year-old war.
“I don’t envision something … that would likely lead to a major change in the overall strategy, which I believe is showing progress,” Votel told a news briefing.
Officials said Trump has shown signs of frustration over the lack of progress since he unveiled a strategy last August that committed to an open-ended deployment of U.S. military advisers, trainers and special forces and increased air support for Afghan security forces. The stated U.S. goal is to push the Taliban militants to work toward a peace agreement with the Kabul government.
Trump was opposed to remaining in America’s longest war, but was convinced by his advisers to press ahead. He authorized last year the deployment of an additional 3,000 U.S. troops, bringing the total to around 15,000.
Trump has also piled pressure on neighboring Pakistan to crack down on militant safe havens on its side of the Afghan-Pakistan border.
Votel said he had seen positive signs from Islamabad but stressed that he wanted to see Pakistan put more pressure on Pakistan-based militants fighting in Afghanistan, including by arresting, expelling or targeting them.
He also noted the key role Washington wants Islamabad to play in promoting dialogue in Afghanistan.
“We also need to see them continue to make efforts to compel the Taliban to come to the table and take advantage of these opportunities,” Votel said.
The remarks come amid growing speculation about moves to open talks with the Taliban following an unprecedented three-day ceasefire during last month’s Eid holiday.
Last month, Pompeo said the United States was ready to “support, facilitate and participate” in discussions with the Taliban over the role of international forces in Afghanistan but that the peace process would be Afghan-led.
The Taliban have rejected talks with the government of President Ashraf Ghani, which they see as illegitimate and instead insisted they would only talk with the United States. – Reuters