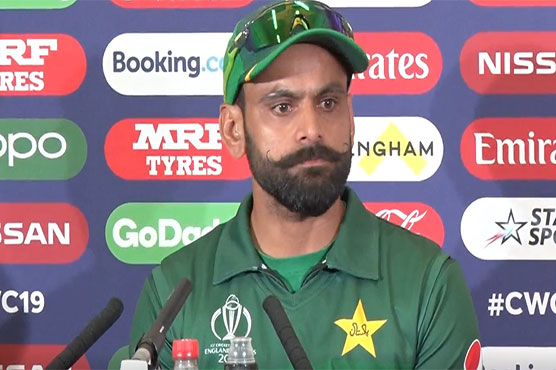 LONDON: Mohammad Hafeez said Pakistan s dismal showing at the World Cup was hurting the players, who were determined to battle back in a bid to reach the semi-finals.
Pakistan are languishing in ninth place in the 10-team table, with only Afghanistan below them, after a single victory in five matches.
The 1992 winners need to win all four of their remaining games and hope other results go in their favour, with four teams qualifying from the round-robin phase.
Their next match is against fellow strugglers South Africa at Lord s on Sunday and Hafeez said the players were determined to make amends for their poor performances so far at the tournament in England and Wales.
“I tell you that to see the team at number nine is hurting all of us,” said veteran Hafeez, whose 84 anchored Pakistan s innings of 348-8 in their only win, over hosts England.
They opened their campaign with a seven-wicket loss against West Indies, also going down to defeats to Australia and India, while their match against Sri Lanka was washed out.
Their final three games are against New Zealand, Afghanistan and Bangladesh.
“We failed collectively as a team,” said Hafeez. “We could not produce a team effort and individual brilliance did not help us either. In cricket these days, you need a team performance.”
“We can t blame any single person. Everyone is responsible for failing to deliver,” added the 38-year-old, who said harsh media criticism after their heavy defeat against India on Sunday had been tough on the players.
“All of us are also hurt by the negative campaign in the media where players and their families were targeted. There was talk of groupings (factions) in the team which was wrong.
“Why don t you talk about such things when the team is winning?”
Hafeez said despite the perilous situation, all was not lost for Pakistan.
“All is not finished for us,” he said. “We are focused on our next game and we are eager to win that match. We had ample time after the India game to regroup for a new beginning.”
Hafeez defended the decision to send India in to bat after winning the toss, despite advice from Prime Minister Imran Khan, who led Pakistan to their 1992 World Cup win, to do the opposite.
“It was a team decision and that cannot be made on what someone has tweeted. It was the team s decision. We didn t bowl well and that s why we lost that game,” he said. …Agencies