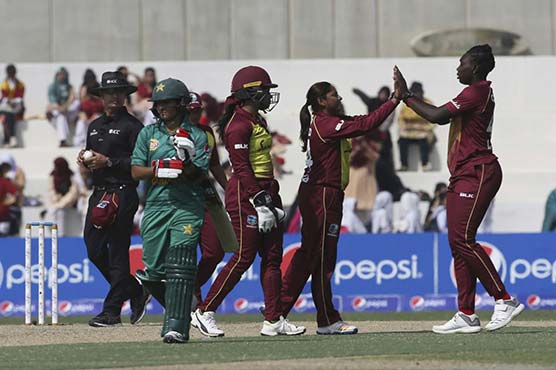 KARACHI: West Indies Women needed a super over to edge out Pakistan Women in their second T20I on Friday and take an unassailable 2-0 lead in the series.
After the visitors finished with exactly the same total (132) the home side had made, the match needed a super over to decide the winner.
In the super over, the match that had otherwise remained competitive, suddenly became one-side as the Windies plundered Sana Mir for 18 runs.
Needing 19 to win, Pakistan Women could only muster a single runs as both their batters — Aliya Riaz and Nida Dar — faltered under pressure.
Earlier, Pakistan captain Bismah Maroof won the toss and elected to bat first. Umaima Sohail was the first one to lose her wicket today when Shakera Selman when Natasha McLean caught her before she could put up any runs on the board.
Pakistan were then at 17 with the loss of one wicket at the end of five overs and had climbed up to 55 for one by the end of the tenth over.
Maroof was the next to make her way back to the pavilion after posting 31 runs on the board. She was stumped by her counterpart Aguilleira while Afy Fletcher bowled the eleventh over of the game.
In the very next over, Pakistan lost Javeria Khan when Chedean Nation caught her at 26 on Deandra Dottin’s ball.
Pakistan were then at 84 at the loss of three at the end of the fifteenth over. In the sisteenth over, Iram Javed (18) was taken out by Dottin.
No more wickets fell after that and Pakistan came up to 132 runs at the end of the designated 20 overs.
West Indies Women had a decent start, with their first wicket not falling until the sixth over by which time they had 30 runs on the board.
At 10 overs, the visitors had posted 28 more runs on the board, with their total coming up to 58 runs.
Kycia Knight(32) was the next to go when Maroof run her out in the 15th over. McLean only managed to make a single run before she was stumped by Sidra Nawaz in the 18th over.
Shemaine Campbelle who had posted 41 massive runs on the board was also caught by Mir in the 19th over, bringing the total number of wickets lost by the West Indies Women to five.
Skipper Aguilleira also managed 6 runs before she was stumped by Nawaz.
Unexpectedly, when the match was tied on the final ball, super overs were played to bring the game to discern the winner of the game.