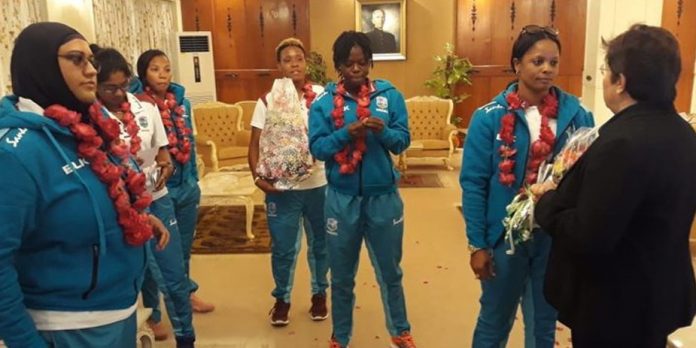 KARACHI: The West Indies women cricket team arrived in Pakistan on Wednesday to play a three-match T20 series from January 31 to February 3 at Karachi’s Southend Club.
The Windies’ return to the country marks the resumption of women’s international cricket in Pakistan since they hosted Bangladesh for two T20Is and two ODIs in September 2015. West Indies last toured Pakistan 15 years ago in March/April 2004 for an ODI series.
Speaking to the media at Karachi’s Jinnah International Airport, Windies interim captain Merissa Aguilleira said she is happy to be in Pakistan after 15 years. “I am happy to see women’s cricket in Pakistan improving,” she said.
She added that the series will serve as a bonus, since they play Pakistan in next year’s Women’s World T20 as well. “The team has the ability to win, however, it is not easy to play in the subcontinent.”
Stand-in Pakistan captain Shoaib Malik welcomed the team and wished the tourists and Pakistan women team all the best for the series.
“Welcome to Pakistan Merissa Aguilleira and team, exciting times! All the best for the series and hope you get some time to check out the beautiful city of Karachi where I grew up. I’m sure Sana Mir, Bismah Maroof and team have planned some fun activities, hope you all enjoy,” he tweeted.
Following the T20 series, the two sides will go head to head in three ODIs in Dubai on February 7, 9 and 11. The first ODI will be played at the Dubai International Cricket Stadium, while the second and third ODIs will be played at the ICC Academy in Dubai.