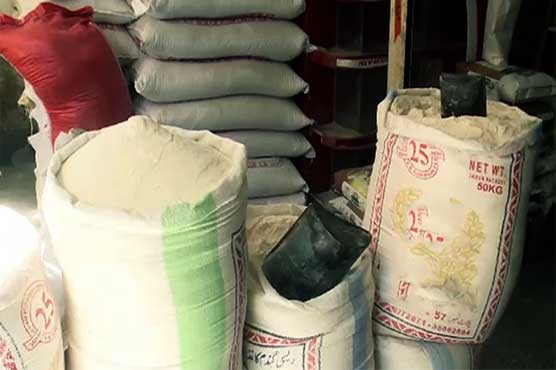 ISLAMABAD: Wheat flour crisis are further intensified across the country and the flour price has skyrocketed up to Rs75 per kg in several cities while putting tremendous burden on the general public as government failed to control the inflationary prices.
In Peshawar, Abbottabad and other cities nanbais (bakers) have closed their tandoors and are on strike against the government after failed negotiations with the provincial Khyber Pakhtunkhwa (KP) government amidst deepening wheat flour crisis.
In KP, a bag of super fine wheat flour weighing 85kg is being sold for Rs5,200 and a 20kg bag is being sold for Rs1,100.

Peshawar nanbais launch strike against rising wheat prices
On the other hand, nanbais demanded the price of roti (weighing 170g) to be fixed at Rs15 while claiming that wood and gas tariffs have also been increased.
In Multan, citizens are forced to buy wheat flour for more than Rs60 per kg due to its ‘artificial’ shortage in the open market.
At shops, whole wheat flour is costing Rs64 per kg whereas shopkeepers are charging white flour for up to Rs80 per kg. Nanbais, consequently, have raised roti and naan prices by Rs2 in the city.
Despite that the subsidised wheat flour is not available at specific sale points allocated by utility stores and the district administration, the administration has been claiming that 80 points were established for the provision of 10kg wheat bags with price fixed at Rs402 per bag.
The administration has further stated that action was being taken for complaints after a daily supply of 29,335 bags each weighing 20kg at those sale points.
In many cities, long queues of people were seen at the subsidised wheat flour sale points established by the local administrations.
In other cities of Punjab including Lahore, Faisalabad, Multan and Gujranwala, the wheat flour is being sold at Rs70 per kg. Within last few days, the flour’s price has increased by Rs6 in Lahore.
In Lahore, people are forced to buy flour at highest-ever price of up to Rs70 per kg, and the growers are holding the flour mill owners and the government responsible for the “Aatta crisis”.
In Faisalabad, the flour prices have skyrocketed with an increase of up to Rs30 per kg as wheat supply to mills has been suspended.
Other nanbais’ associations in Punjab have given an ultimatum to the government asking it to provide them flour at the previous rate or they would raise the prices of naan and roti.
Shockingly, earlier, Provincial Minister of Punjab for Food Sami Ullah Chaudhary has denied reports of wheat flour shortage in Punjab by stating that “wheat flour at the official rate of Rs805 per 20kg is available”. “We are ready for cooperation with Sindh and Khyber Pakhtunkhwa Punjab should not be punished for someone else’s incompetence.”
On the other hand, the provincial food department and the district administration of Lahore have jointly formed a plan to provide “relief” to the public of the city amid the prevailing crisis, and have supplied 10,000 bags of wheat flour to ten model markets.
In Sindh, due to the disruption in supply of wheat to the mills, the price of wheat flour bag of 100kg hit a record high of up to Rs5,300 within three months after an increased of Rs1,300.
Contrarily, the Sindh government held the federal responsible for the wheat crisis and subsequent increase in flour prices.
The flour grinding vendors (Atta Chakki owners) refused to sell flour below the price of Rs70 per kg keeping in view of massive increase in 40kg-wheat price to Rs2,150.
In Karachi, the 5kg and 10kg flour bags of Bake Parlor and Ashrafi brands further rose to Rs340-350 and Rs660-670 as compared to Rs310-330 and Rs630-640, respectively, two days back.
Some retailers demand Rs680 to Rs700 for branded 10kg fine flour brands, thus alarming consumers for further jump in prices. Chakki Flour and super fine flour (Maida) sell at Rs70 per kg.
Despite so-called measures taken by the government, the “wheat crisis” has been prevailing across the state, and even relief centers could not provide aid to citizens and brought more misery for the common man.
The crisis has become severe just a day after PM Imran ordered the provincial governments to play an active role in curbing food prices, profiteering and hoarding.