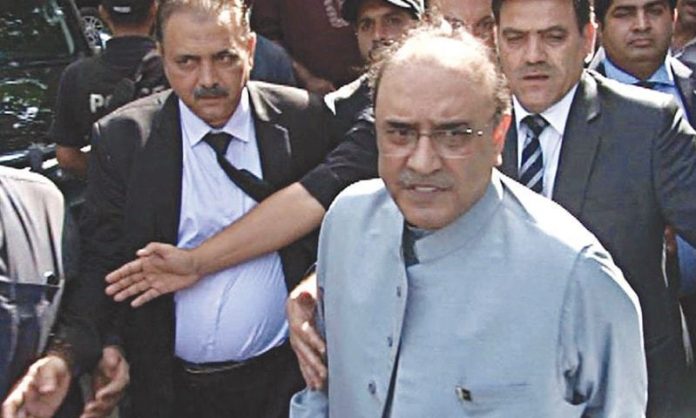 ISLAMABAD: PPP Co-Chairman and former president Asif Ali Zardari said on Tuesday that they will take legal course of action against National Accountability Bureau (NAB) Chairman Justice (R) Javed Iqbal over his interview to a journalist.
Speaking to journalists on the premises of the accountability court following the hearing of the fake bank accounts case, he said the NAB chairman’s office doesn’t permit him to be interviewed.
“We will take legal action against NAB chairman” he said. Referring to banker Hussain Lawai’s arrest in the case, he lamented an 80-year old elderly man is being presented in the court handcuffed despite the fact that no charges have been proved against him.
He questioned how the country’s economy would work if elderly men will be forced to appear in courts.
Earlier, the PPP Co-Chairman had said either the anti-graft watchdog would work or the economy.
Responding to journalists’ questions he said both the bureau and the country’s economy could not work together.
“The question is, either NAB will work or the economy. Both cannot work together,” he said.
Zardari prayed for former prime minister Nawaz Sharif’s health saying May Allah grant health to everyone.