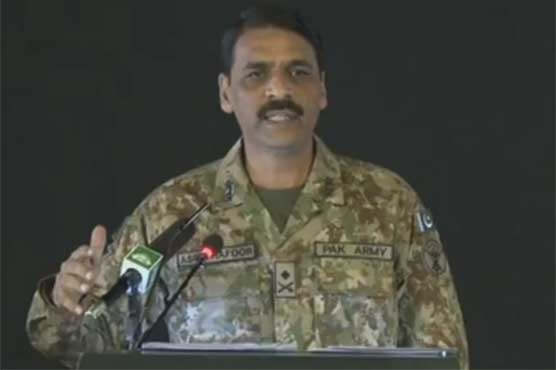 RAWALPINDI: Inter-Services Public Relations (ISPR) Director General Major General Asif Ghafoor on Thursday said that the reservations expressed by the Pakistan Army over the special court’s verdict in high treason case against former president General (r) Pervez Musharraf have been proven true.
Addressing a press conference on Thursday, he said that the armed forces have rendered unmatched sacrifices for the stability in the country and we will not let this stability be compromised.
“We know how to protect integrity of the country,” he said and added we are under oath always to safeguard the country’s interests and we have proven this in the past with the support of the nation.
Maj Gen Asif Ghafoor said that the words used in detailed verdict are “beyond humanity, religion, culture and any other values”. “Pakistan Army is not just an institution, it is a family. We know how to defend the country and how to defend the honour and dignity of our institution.”
On Tuesday, a special court in Islamabad has sentenced former president and top military official Pervez Musharraf to death in high treason case. The verdict that was reserved on December 5 was announced by a three-member bench comprising Chief Justice of Peshawar High Court (PHC) Waqar Seth, Justice Nazar Akbar of Sindh High Court (SHC) and Justice Shahid Karim of Lahore High Court (LHC).
The detailed verdict of the court was issued earlier today. Justice Nazar Akbar opposed the verdict of sentencing Pervez Musharraf to death and cleared him of the accusations while Justice Waqar Seth and Justice Shahid Karim handed him the death penalty. The detailed verdict has been termed as first of its kind.
The special court in its detailed verdict stated that Musharraf had “been afforded more than his due share of fair trial” and “given every opportunity to defend himself”.
“We are of the considered view that the accused in this High Treason case has been afforded more than his due share of fair trial. The protected trial of a constitutional and not any ordinary offence that began six years ago in 2013, has yet to see its end in 2019. The accused, who has been given every opportunity to defend himself, has by his conduct in the proceedings only evinced his utter contempt for the law and legal institutions in this country. The facts of this case are well documented. The documents clearly demonstrate the guilt on the part of the accused. It proves beyond a shadow of reasonable doubt all the charges of High Treason leveled against accused by the State.
“It is patent by the act and conduct of the accused facing trial, that he has persistently and stubbornly strived ever since the commencement of this trial, to delay, retract and in fact evade it. It has been his plea throughout that either on account of ill health or for security hazards he could not reach up to this Court to face trial,” said the judgement.
“As a necessary corollary to what has been observed we find the accused guilty as per charge. The convict be therefore hanged by his neck till he dies on each count as per charge.
“We direct the Law Enforcement Agencies to strive their level best to apprehend the fugitive/convict and to ensure that the punishment is inflicted as per law and if found dead, his corpse be dragged to the D-Chowk, Islamabad, Pakistan and be hanged for 03 days.”