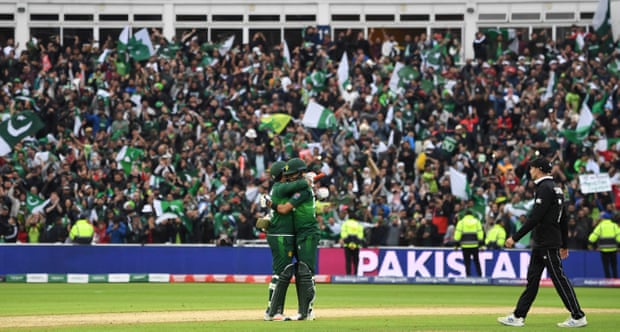 BIRMINGHAM: Pakistan took a stuttering start in their chase of 238 runs as the Kiwis struck their first early breakthrough. A promising Fakhar Zaman departed early with just 9 runs after Trent Boult took a catch.
The second casualty struck soon after and opener Imam-ul-Haq departed for 19 runs as Lockie Ferguson dove in for a catch.
The third dismissal was that of Mohammad Hafeez for 32 runs.
In the final two runs of the game, Haris Sohail was dismissed for a run out.
Babar Azam was the crucial player of the match as his 101 contribution marked Pakistan’s first World Cup century as well as Haris Sohail’s 68 run contribution.
Mohammad Amir gave Pakistan an electric start by bowling out Martin Guptill on the first ball of his first over and the game’s second, after New Zealand won the toss and chose to bat first in the must-win clash at Edgbaston, Birmingham on Wednesday.
Guptill played on to his stumps at a mere score of 5, leaving New Zealand one down at 5 in the second over.
The Kiwis suffered their second loss in the 7th over when the young Shaheen Afridi had Colin Munro caught in the first slip.
Afridi struck again in the 9th over, forcing Ross Taylor to edge a beautiful out-swinger. The ball was travelling almost into the slip cordon but captain Sarfaraz Ahmed swooped in from somewhere and grabbed a blinder of a one-handed catch.
Afridi, who was catching fire, struck yet again in the 13th over, with an identical trap. This time Tom Latham walked back as the pacer took his third wicket.
The quartet of setbacks meant it wasn’t until the 16th over that the Kiwis brought their 50.
As the Kiwis struggled to pile on the runs, New Zealand captain Kane Williamson brought new found hope as the right-handed batsman was building the momentum. However, it was short lived as Shadab Khan’s delivery sent him back for 41 runs.
The next fall was in the 47 over and was much needed as the Kiwis scored above 200 runs. Colin de Grandhomme departed for a run out after a major contribution of 64 runs.
The toss was delayed by an hour due to a wet outfield from the overnight drizzle. No overs have been lost.