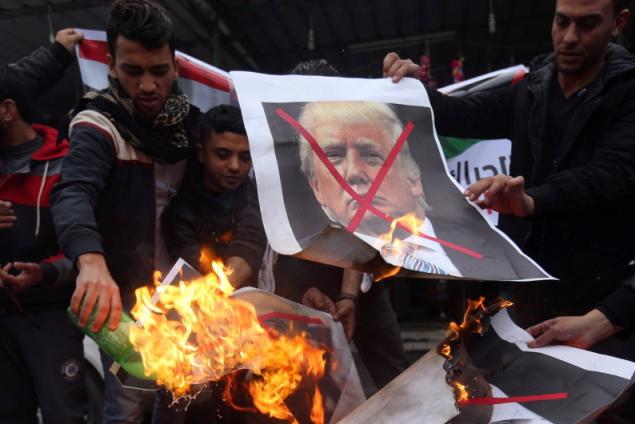 WASHINGTON: Muslims across the world have warned of disastrous consequences after President Donald Trump recognized Jerusalem as Israel’s capital.
Condemnation of Trump’s move poured in from all capitals of Islamic countries over Trump’s announcement, which could ignite violent protests across the Islamic world.
Pakistan has strongly condemned the decision of the United States to recognize the occupied Al Quds Al Sharif as the so-called capital of Israel. Earlier, in a statement, the Prime Minister’s office said that Pakistan also unequivocally opposes shifting of the US embassy to Al-Quds Al Sharif.
The statement said that decision represents a serious violation of international law and applicable UN Security Council resolutions. It further said that Pakistan shares the international outrage and is deeply concerned over the implications of this decision for international peace and security, especially in the Middle East. Pakistan has also welcomed the announcement by Turkey to convene an Extraordinary Islamic Summit next week to discuss this serious issue.
Pakistan called upon the UN Security Council to take cognizance of this situation and take steps in accordance with the UN Charter. It also urged the United Sates to revisit its decision as soon as possible in order to avoid the potentially grave repercussions in the region and beyond.
Meanwhile, Palestinian leader Mahmoud Abbas has pointed out that Trump has destroyed America’s credibility as a Mideast peace broker. Egypt, which was the first Arab nation to sign a peace treaty with Israel in 1979, denounced Trump’s decision, describing it as a violation of international resolutions on the city’s status. Jordan’s King Abdullah II has expressed concerns in a telephonic call to Trump saying that ignoring Palestinian, Muslim and Christian rights in Jerusalem would fuel further extremism.
Large scale protest demonstrations have begun all over the world against the decision US president Donald Trump. A protest demonstration was staged in front of US embassy in Berlin. Demonstrations were also staged in Gaza, West Bank, Lebanon, Jordan and Turkey.
In Gaza, hundreds of Palestinian protesters burned American and Israeli flags and waved Palestinian flags and banners proclaiming Jerusalem as “our eternal capital” and calling recognition of it as Israel’s capital as a red line. Palestinian officials, declared the Mideast peace process as finished one. In Beirut, several hundred Palestinian refugees staged a protest in the streets of the Bourj al-Barajneh camp.
They raised slogans against the US and Israel., In Turkey, hundreds of people took to the streets to stage demonstrations near U.S. diplomatic missions in Ankara and Istanbul. Meanwhile, the United States, Germany and France have directed their citizens to exercise caution in visiting occupied Jerusalem.
Saudi Arabia has condemned the US decision to recognise Jerusalem as Israel’s capital, amid growing international criticism of the move. In a statement, Saudi Arabia said President Donald Trump’s announcement was unjustified and irresponsible.