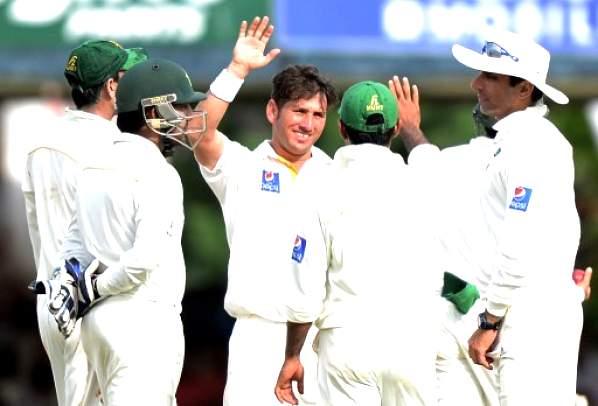 PALLEKELE: Sri Lanka, sent in to bat, were 153/4 in their first innings at tea on the opening day of the third and final Test against Pakistan in Pallekele on Friday.
Dimuth Karunaratne was unbeaten on 70 and Jehan Mubarak on nine.
Pakistan captain Misbah-ul-Haq won the toss and asked Sri Lanka to bat as both teams made four changes for the series-deciding third and final Test at Pallekele on Friday.
“There is a little bit of moisture in the pitch and the first two hours will be really crucial,” Misbah told reporters, explaining his decision.
“As it goes, it only becomes flatter and flatter. That’s why we’re bowling first.”
Pakistan will be without injured paceman Wahab Riaz, while the trio of opener Mohammad Hafeez, pace bowler Junaid Khan and left-arm spinner Zulfiqar Babar have all been dropped from the starting line-up.
Rahat Ali, Shan Masood, Imran Khan and Ehsan Adil have been included as Pakistan opted for a bowling attack with three seam bowlers and in-form leg-spinner Yasir Shah.
The hosts, who won the second Test in Colombo to level the series, are without the retiring Kumar Sangakkara, who will play two Tests against India before ending his international career.
Sri Lanka also left out injured paceman Dushmantha Chameera, left-arm spinner Rangana Herath and middle order batsman Kithuruwan Vithanage.
“I would have bowled first as well, the coin slipped up so I could not give it a good spin,” Sri Lanka captain Angelo Mathews joked.
“We’re moving into a new era without players like Kumar Sangakkara and Mahela Jayawardene. Everyone else will have to take more responsibility.”
Upul Tharanga, Jehan Mubarak, Suranga Lakmal and Nuwan Pradeep are the four replacements.
Teams
Sri Lanka: Kaushal Silva, Dimuth Karunaratne, Upul Tharanga, Lahiru Thirimanne, Angelo Mathews (captain), Dinesh Chandimal, Jehan Mubarak, Dhammika Prasad, Tharindu Kaushal, Suranga Lakmal, Nuwan Pradeep