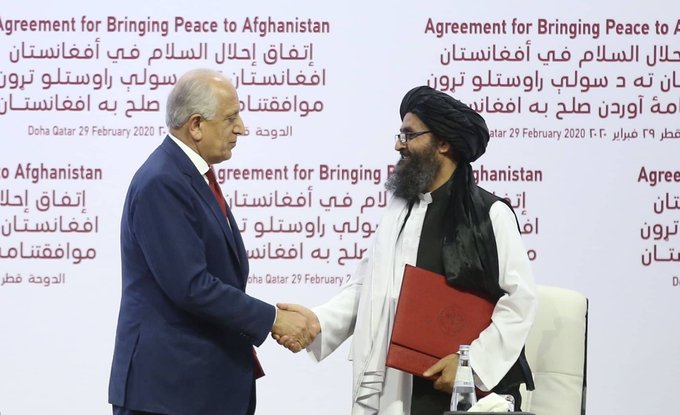 KABUL: The US special representative for Afghanistan Zalmay Khalilzad on Thursday met with Afghan Taliban leader Mullah Abdul Ghani Baradar after differences emerged over the release of 5000 Taliban prisoners.
Zalmay Khalilzad taking to Twitter said that Washington is committed to facilitating prisoner exchange between the Afghan government and Taliban group.
“I met Mullah Baradar and his team last night for a candid discussion about next steps, followed by a constructive phone call with President Donald Trump. We all agreed the purpose of the US-Taliban agreement is to pave the path to a comprehensive peace in #Afghanistan,” Khalilzad said in a Twitter post.
Khalilzad further added “Increasing violence is a threat to the peace agreement and must be reduced immediately. In addition to discussing the need to decrease violence, we also talked about the exchange of prisoners.”
He said “US is committed to facilitating prisoner exchange, agreed in both US-Taliban Agreement & US-Afghanistan Joint Declaration. We will support each side to release significant numbers.”
The meeting comes after Afghan President Mohammad Ashraf Ghani had said only the Afghan government can decide regarding the release of Taliban prisoners.
The United States conducted an airstrike on Wednesday against Taliban in Afghanistan’s southern Helmand province, a US forces spokesman said, the first such attack since a troop withdrawal agreement was signed between the two sides on Saturday.
The Taliban were actively attacking an (Afghan National Security Forces) checkpoint. This was a defensive strike to disrupt the attack, said Colonel Sonny Leggett, a spokesman for the US Forces in Afghanistan in a tweet.
He said Washington was committed to peace but would defend Afghan forces if needed.
“Taliban leadership promised the (international) community they would reduce violence and not increase attacks. We call on the Taliban to stop needless attacks and uphold their commitments,” he said.
On Tuesday, there were several attacks against Afghan officials blamed on the Taliban, including one at a security checkpoint near a copper mine that killed five Afghan policemen.