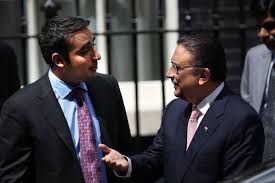 ISLAMABAD: The Founding Day of PPP this year is being celebrated under the leadership of Chairman Bilawal Bhutto Zardari in a manner to make it not only an occasion of festivities but also of stock taking, reorganization and soul searching in a frank and free exchange with the Party workers.
“I wish to congratulate the Party workers in celebrating the founding day. I also join the workers in their demand that Chairman Bilawal Bhutto Zardari lead the democratic struggle from the platform of Parliament as well to further the realization of democratic aspirations of the people”.
This has been stated by the President Mr. Asif Ali Zardari said in a message on the 49th founding day of the Party tomorrow on November 30.
It is worthwhile to recall the foundational principles on this occasion. The twin principles namely “Democracy is our politics’ and ‘All power to the people’ are ingrained in the consciousness of the people and must never be allowed to be erased, he said. Mr. Zardari said that in the pursuit of this mission our two Chairpersons and countless workers have laid down their lives.
However, because of the incompetence of rulers, political space has continuously been ceded to unrepresented and un-elected elements, he said. The principle of ‘all power to the people’ is fast eroding. This erosion of political space of elected representatives and transfer of power to unrepresentative elements is an aberration that must be corrected through performance, delivery and integrity, he said.
On this occasion we also pay homage to the leaders and workers of the Party who have made enormous sacrifices in the course of our historic struggle.
It is a matter of historical record as well as abiding national shame that while these political workers were fighting and suffering for democratic ideals there were also those in the state institutions who colluded with the dictators, took oath of allegiance and provided them cover, he said. This makes the sacrifices of our workers even more glorious. The Party salutes all these valiant workers for their dedication, commitment and sacrifices made for the cause.
Spokesperson senator Farhatullah Babar said Party Chairman Bilawal Bhutto Zardari will be participating in the week long celebration sin Bialwal House Lahore and also meeting the workers drawn from all provinces to further the process of completing the organizational structures at the divisional and district levels throughout the country.