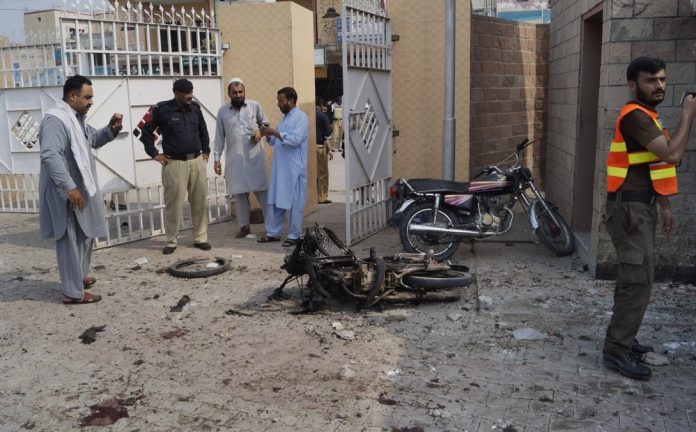 DERA ISMAIL KHAN: At least 12 persons including six policemen were martyred while 30 others sustained injuries in gun attack and a subsequent suicide bomb blast inside trauma Centre of District Headquarter hospital D I Khan on Sunday.
According to Dl Khan District Police Officer (DPO) Salim Riaz, unidentified gunmen on four motorcycles opened fire on policemen at the Kotla Saidan check post in a residential area at approximately 7:45am on Sunday morning, martyring two policemen.
The DPO said that following the gun attack, a suicide blast took place at the hospital where the victims were shifted. The bomber struck at the entrance to the hospital, martyring four policemen and six civilians who were visiting their relatives. About 30 others were injured in the two incidents, DPO Riaz said.
Inayatullah, a local forensics expert, said a female attacker set off 7 kilograms of explosives packed with nails and ball-bearings.
“The female bomber, aged around 28 years, came on foot and blew herself up, martyring two policemen and four civilians, and wounding 13 others,” he said. The injured included at least eight policemen and five civilians.
The blast damaged the emergency room, forcing it to be shut down, according to a hospital official, who said the wounded were then shifted to a military hospital. The official spoke on condition of anonymity for fear of reprisal.
The TTP claimed the attack but did not acknowledge that the bomber was a woman. According to a statement from TTP spokesperson Muhammad Khorasani, the attack was carried out in retaliation for the killing of a suspected terrorist by the Counter-Terrorism Department in DI Khan on June 23.
Khyber Pakhtunkhwa Chief Minister Mehmood Khan strongly condemned the incident and said that they shared the grief of the victims’ families.
He said that such terrorist attacks would not dampen their resolve.
“Terrorists do not have any religion,” CM Khan said, adding that no religion allows attacks on innocent individuals.
KP Health Minister Hisham Inamullah Khan also condemned the incident and said that orders had been given to provide the injured with the best treatment. Emergency was declared in all nearby hospitals.
He said that the sacrifices of the martyrs would not go in vain and very soon terrorism would be defeated.
Leader of the Opposition in the National Assembly Shehbaz Sharif also issued a condemnation and extended condolences to the families of the victims. “We are proud of our police officers who embraced martyrdom to protect the public,” he said.
The military has carried out several major operations in recent years against the TTP and other militant groups in areas along the Pak-Afghan border. The violence has declined, but the militants still make their presence known through occasional attacks, mainly targeting security forces and religious minorities.