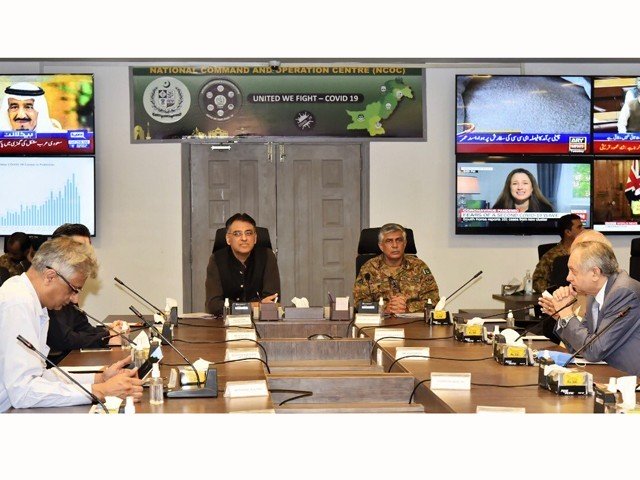 ISLAMABAD: The National Command and Operations Centre (NCOC) was told that in the light of Prime Minister Imran Khan’s instructions, about 1,227 oxygenated beds have been provided to hospitals across the country.
A meeting of the NCOC was held on Tuesday with Federal Minister for Planning, Development Asad Umar in the chair to discuss the availability of Personal Protection Equipment, masks and other resources in the hospitals during coronavirus outbreak in the country.
The participants were informed that around 80 oxygen beds have been provided to Azad Jammu and Kashmir — including 20 beds at Abbas Institute of Medical Sciences, 20 at DHQ Kotli, 20 beds at DHQ Bhimber. 20 beds have been sent to Combined Military Hospital Muzaffarabad.
In province-wise breakdown, the meeting was apprised that about 100 oxygen beds were given to Fatima Jinnah Hospital in Balochistan, while in Gilgit-Baltistan, 100 more oxygen beds have been added to the healthcare system.
In Khyber Pakhtunkhwa, 320 oxygenated beds — including 250 beds of Peshawar Institute of Cardiology and 70 beds at Charsadda Hospital — have been allocated in the province.
The meeting was briefed that Punjab has been provided with 330 oxygenated beds out of which 280 were operationalised at Expo Centre Lahore and 70 at Social Security Hospital.
In addition, Sindh has been provided with 70 more oxygenated beds at Abbasi Shaheed Hospital.
Similarly, about 227 oxygenated beds have been given to Islamabad including 13 beds of polyclinic Hospital, 152 beds at PIMS and 59 beds at Capital Development Authority Hospital Hospital.