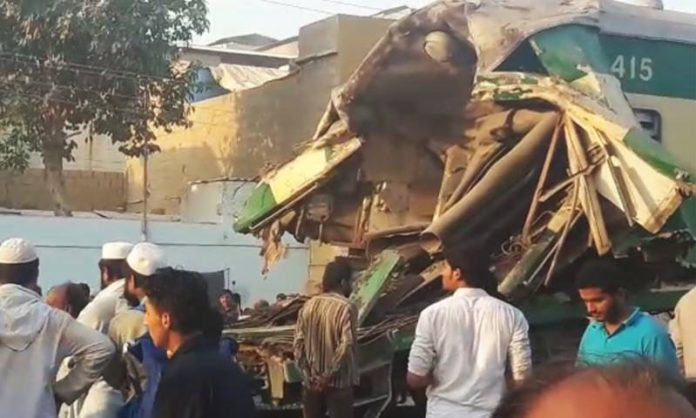 KARACHI: A head-on collision between two trains in Karachi’s Landhi area left at least 19 people dead and 50 more injured on Thursday.
The trains crashed at Goth Station between Fareed Express and Zakaria Express, due to wrong signal given to the latter.
The injured were transferred to Jinnah Hospital, Abbasi Shaheed Hospital and Civil Hospital, where emergency has been declared.
Sources told that both trains arrived in Karachi from Punjab province while as many as three carriages have been reportedly damaged due to the mishap.
At least twenty injured have been shifted to Jinnah Hospital, informed head of emergency at JPMC, Seemi Jamali. Administration officials at the Jinnah Postgraduate Medical Centre (JPMC) said 17 bodies were brought to the hospital’s mortuary.
Railway officials gave green signal to the train coming from behind by mistake, and it went on to hit the train at rest, said Adviser to Sindh Chief Minister on Labour Senator Saeed Ghani.
Initial reports revealed that the accident took place due to dysfunctional signal at Goth Station.