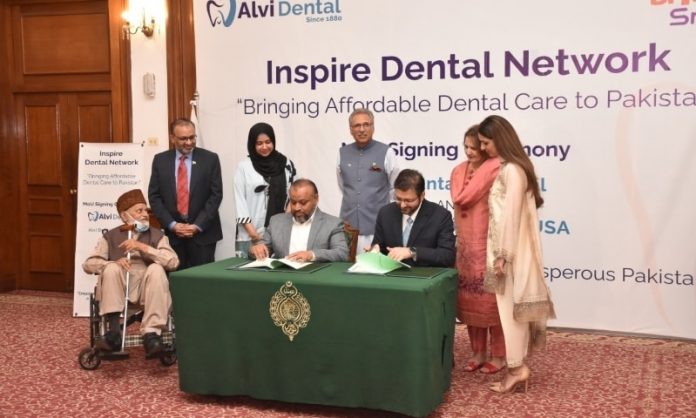 President Dr Arif Alvi has said that using the Sindh Governor House for signing an MOU between Alvi Dental and an American company was “poor judgment”.

“For the signing ceremony of an MOU between Dr Awab [his son] and his friend in my presence, the venue selection was a matter of poor judgment,” he tweeted Tuesday.

At the ceremony, which was held on Monday, an agreement was signed by Alvi Dental Hospital and Bringing Smiles USA to provide affordable dental care to the people of Pakistan. Pictures from the venue show the president standing in the background.

Dr Arif Alvi congratulated his son on Twitter after the event. When pictures from the event started circulating on social media, several politicians criticised using the Governor House as a venue for a private event.

Some called it a “conflict of interest”.

PML-N’s Ayesha Raza Farooq raised a number of questions. “Why is this signing off taking place at the Governor’s house? Why is the President of Pakistan promoting his family’s business? Isn’t this a violation of his oath? Conflict of interest?”

Former finance minister Ishaq Dar called the move a “significant disgression” on part of the president. “Article 42 of the Constitution which deals with the oath of the President has also the following provision: “That I will not allow my personal interest to influence my official conduct or my official decisions,” he tweeted.

Later in the day, Dr Awab Alvi, the president’s son, came to his rescue. “The President resigned from Alvi Dental when he became President. This venture is between me & my Pakistani US diaspora dentist-alumnus friend.”

He revealed that the venue, originally, was Alvi Dental but it was changed because of security reasons. Any catering at the venue was paid for by him personally, Dr Awab added.